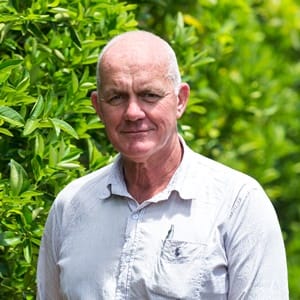 What is top of mind for you to do in the orchard in the next few weeks?

Start to reduce irrigation duration and frequency as the temperatures slowly decrease and the fruit nears maturity.

Application of phosphoric acid for the control of phytophthora root rot. Now is the ideal timing of such an application as the root flush occurs.

Next round of fruit thinning is to start, which will focus on removing poor quality fruit and sunburn.

Is there any pest or disease that you are targeting now or preparing for in the next few weeks?

The incidence of Emporer brown spot will start to increase soon as cooler and moister conditions prevail in the morning, therefore timely fungicide applications will be needed.

Routine glyphosate applications for weed control will have to be monitored closely as this may cause fruit drop closer to harvest.

What would you like to get done if you had more time?

Get a greater proportion of thinning completed at an earlier date.  Experience has shown that thinning in late summer/ early autumn will not give the necessary size response.

Producers in the Burnett region have experienced average rainfall and temperatures through February, whilst Emerald has remained relatively hot and dry. Year to date figures indicate that Emerald has received less than 50% of average annual rainfall. February has also been a very hot month in Emerald with the average maximum temperature being 2.9°C above the long-term average.

Good soaking rainfall fell at the start of February (particularly so in the Burnett) ensuring that the soil profile was filled, and the irrigation pumps were given a reprieve for a little while. The rainfall received will greatly aid the sizing of the current crop.

Crops continue with an average growth rate. As indicated previously, there is a large range of fruit sizes between orchards and sometimes even between blocks. This can only be attributed to the delayed flowering that occurred during September and October.

Hand thinning of some blocks continues with significant volumes of fruit needing to be removed from some of the blocks that are quite heavy. Fruit size in these blocks looks to be smaller than desired at present.

Substantial amounts of sunburn occurred during the middle of February when heat wave conditions prevailed for a week.

Lemon harvest has commenced for many growers with good volumes of fruit being available.

Black spot continues to express in many blocks across a range of varieties. As this is a latent disease there is nothing that can be done for control once expression starts. The disease incidence is most likely linked to the wet conditions experienced during October and November 2017.

Early season varieties are now becoming susceptible to Queensland fruit fly. Growers should now have been baiting these blocks for some time to ensure control. Control of Queensland fruit fly with baiting is very successful if the baiting program is started early and is done religiously. Failure to bait these blocks on a weekly basis will lead to damage from this pest.

Pests and diseases to look out for in the coming month:

This Seasonal Update for Queensland has been prepared by Mal Wallis, CitriCare.