By Nerida Donovan and Andrew Miles

Xylella that causes CVC is not yet in Australia

Xylella is number one threat to Australian plant industries

Vigilance needed to keep Xylella out of Australia

CVC disease and its cause — Xylella

CVC is caused by the bacteria Xylella fastidiosa subsp. pauca. It is a serious disease of sweet orange and other citrus species, leading to tree decline and reduced production. The bacteria get into the xylem (water) tubes of the trees which then transport the bacteria throughout the tree. 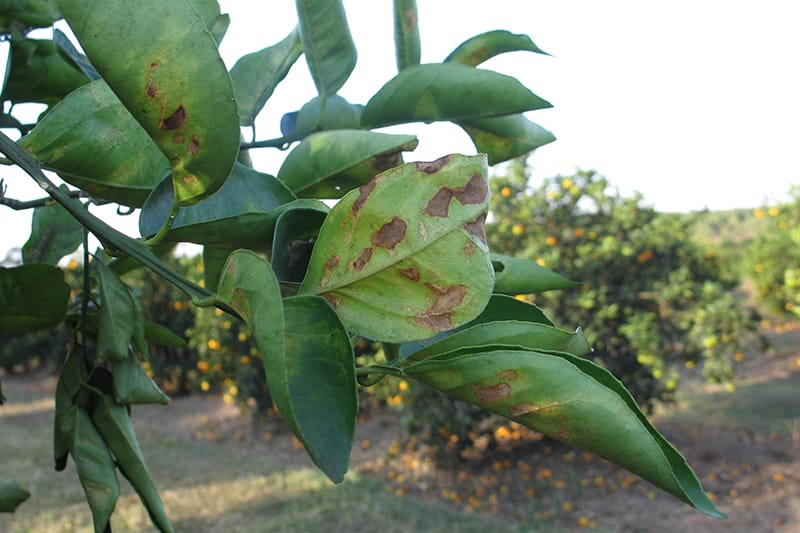 Symptoms include yellowing and mottling patterns on the leaves indicative of nutrient deficiency (mainly zinc) with corresponding brown, gummy lesions on the underside of leaves. Fruit on infected trees are small with hard, thin rinds and colour early but ripening is inhibited. The disease spreads by grafting of infected material or by insect vectors.

Xylella is not yet present in Australia but it is considered to be the number one threat to Australian plant industries collectively, given its expanding geographic distribution around the world and host range. Different subspecies of Xylella fastidiosa cause disease in over 350 commercial and ornamental plant species, with new hosts regularly added to the list. Diseases caused by Xylella include Pierce’s disease in grapevine, quick decline in olives and leaf scorch in coffee and almonds. In recent years, government and industry have strengthened measures to reduce the likelihood of introducing Xylella to Australia and to get prepared for if (or when) it arrives.

The glassy-winged sharpshooter is one vector associated with the spread of CVC and whilst we don’t have the sharpshooter here yet, any insect which feeds on the xylem sap of infected plants can spread the bacteria. Take the case in southern Italy where ancient olive trees are dying due to transmission of the Xylella bacteria by an insect commonly found there, the Meadow spittle bug.

In the absence of a cure, prevention is the key to management of graft-transmitted diseases like CVC. Controlling populations of insect vectors and removal of infected trees are important for in-field management but it is important to keep these diseases out of citrus orchards by planting disease-free
nursery trees.

Brazil has been significantly impacted by CVC since it was first detected there in 1987. Infection led to yield reductions of more than 70% in susceptible sweet orange varieties. It was estimated in 2007 that CVC was costing US$120 million per year in lost production, cost of control methods and tree removals. However, it was their organised system for production of disease-free trees, made mandatory in the Brazilian state of Sao Paulo in 2003 to combat CVC, which gave them a significant head start in the battle against HLB when it was detected in 2004.

The most likely pathway for Xylella to reach Australia is via plant propagation material and insect vectors.

Australia’s quarantine and surveillance programs run by the Federal Government have so far prevented Xylella’s introduction and remain key to significantly reducing the risk of its entry, as well as other diseases like HLB, into the country. The industry-owned National Citrus Repository Program and Auscitrus propagation scheme, in collaboration with the NSW Department of Primary Industries, make health-tested and true-to-type budwood and rootstock seed available to nurseries for tree production but the use of this system is not mandatory. The discretionary use of the propagation scheme increases the exposure of the Australian industry to diseases such as CVC, HLB and citrus canker. It is vital that Australia continues to strengthen its biosecurity system to protect Australian citrus and provide opportunities for industry growth.

Australia hosted an international symposium on Xylella fastidiosa, in May 2017. A booklet summarising the key learnings is available on the Department of Agriculture and Water Resources website agriculture.gov.au.

Online tool helps farmers cope with challenges and get the most out of every...