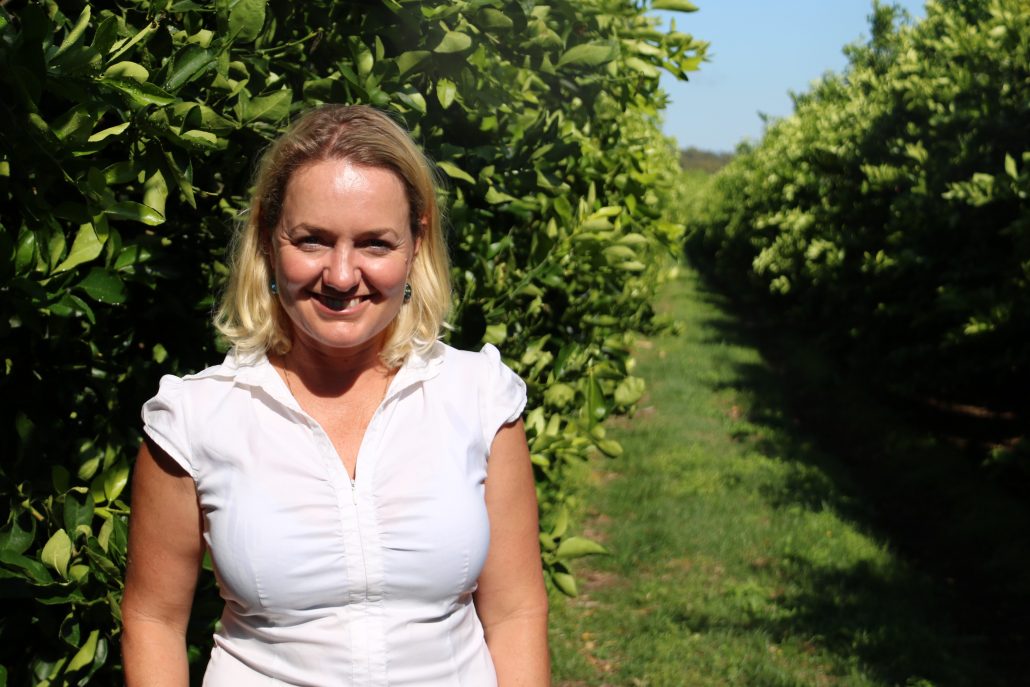 ‘Off’ crops are virtually unknown in Emma Robinson’s operation at Gayndah, Queensland, thanks to the former pharmacist’s focus on nourishing her trees.

With three farms in production and a fourth under development, Emma says paying attention to the physical needs of her limes, lemons and mandarins is just common sense.

“You need to give them everything they need to be healthy. You can’t just simplify it down to four elements.

“My father was a very, very good citrus grower and I always wanted to make him proud, following him around trying to learn as much as I could.

“Citrus nutrition is my big thing: overall plant health. I really love trying to work out what it is that they need, doing soil and leaf analysis, looking at what I can do to make it better all the time.”

Describing her trees as “the things that make me the money”, she said she cared for them “very, very well”.

“We’ve just had a massive Imperial season so if the trees have done that much work then they’re probably going to require some special care,” Emma said.

“I have only two months to get them back into shape to flower again. If I miss that window I’m going to end up with nothing so I need to work hard to ensure they bounce back.

“With mandarins, if you don’t make them flower then that’s it: you’ve lost them. You can bring limes on whenever you want – if you miss your first opportunity you can go again – but with Imperials you can’t, and with Murcotts it’s even tighter.

“Many people have off crops but I make sure I don’t by building them back up in the time I have.”

Emma said her mandarins typically looked “pretty terrible” by the end of a normal season.

“They need a lot of intensive help but actually they’re meant to look bad by the time they finish.

“If they had too much nitrogen the flavours wouldn’t be there. We have to starve them; in the end they have to be a little bit hungry.

“But then, as soon as the fruit’s off, we have to get them back up to hit the ground running for the next crop.”

Emma grows citrus on three farms about 7km from Gayndah and has just bought another in a more remote location. Lying roughly 50km west of her home base, the new property will be planted to a mix of blood oranges and pecans.

“This cattle farm is one of my experiments,” Emma said.

“I’m putting blood oranges onto it because of its unique climate: exceptionally cold and exceptionally hot, which is what’s needed to give the pigmentation. It’s further inland in a very deep valley so it will have automated irrigation and frost fans.”

Never shy of a challenge, Emma has built her business by taking carefully calculated risks and pinpointing niche openings.

“I started out with just a small Imperial farm which was naturally early so I concentrated on making everything else, in turn, as early as I possibly could because the money’s so much better at the start of the season than the finish.

“Limes, for example, can vary a lot depending on the time of year – I don’t want to have them coming in when the glut arrives from January onwards so I do everything I can to avoid picking the bulk of them then – but with lemons the better prices are there in summer.”

Emma has about 90ha under citrus at present. “Every year I’ve been developing more – it keeps me from having a terrible tax problem,” she said. “I started with 2000 good Imperial trees and planted another 3000. Then lemons and limes were the first things to go in on a new farm I built up from scratch and I added more of both later.”

“They’re only 3.5 years old and there’s a big problem with navel splitting and breaking down fungally so they have to be pre-dipped, which isn’t customary around Gayndah, and they also wind-rub badly even though I’ve wineglass-pruned them, so the pack-out hasn’t been good so far.

“I wouldn’t say that economically they’re working for me yet but I believe in them, because they’re a beautiful piece of fruit to eat, so I’ll get there.”

Next year Emma will add 20ha of Murcott mandarins to one of her Gayndah farms.

She’s also looking beyond the domestic market for the first time. “My plantings in the past 12 months have moved in the export direction and for the next couple of years they’ll also be export-based varieties.”

Our Committees Scroll to top