Using new tech to get back to basics in FNQ

The conversion of a former sugarcane block in Far North Queensland to a lemon and lime enterprise utilizing automated fertigation is impressive, moreso when you learn the owner has been involved in farming for barely four years.

Helicopter pilot Wim Van Niekerk began farming in 2016 when his father, Kosie, presented him with the opportunity to take over  a Dimbulah farm he purchased the previous year.

Kosie first visited Australia in 2010 to investigate opportunities outside South Africa – driving from Perth up to FNQ. Dimbulah appealed from both a business sense, due to the opportunities the seasonal production timeframes can open up, and in terms of lifestyle, as it was similar to their community in South Africa.

When Wim took over the farm in 2016 after a career as a helicopter pilot, the block had 25 hectares of Tahitian limes, which were four months old. The rest of the 120ha farm comprised Rhodes grass and Lucerne.

At only 27 years old now, and with no previous farming experience, Wim approached his neighbours for advice on growing lemons and limes. He learnt much about farming and running a business from his father, and regularly speaks with him. But his father had very little experience in citrus.

“In Dimbulah, I take my hat off to them,” he said.

“There are a lot of open people. I visited the biggest lemons farmers in Dimbulah, sat with them, asked them to walk through the orchards with me, and explain how it works. That’s how I got most of my farming knowledge in Dimbulah.

“They were very receptive and opened up and told me everything. They were a really great help.”

The system utilizes two 16mm drip lines for each row with 600mm spacings delivering two litres/hour. The entire farm can be watered in 12 hours if trees receive 100 litres/day.

Wim said there was limited drip irrigation in Dimbulah and his neighbours are now asking him to share his knowledge.

“At the end of the day, it’s very satisfying when those people phone me and ask me questions because it’s working well.”

A 30 kilowatt solar system installed on the shed roof can run the pump for 12 hours a day without using power from the grid. Wim said drip irrigation enable shim to gain further efficiencies from the solar power system.

“Cost management is where you’ll make your returns in business and if you can do 12 hours and only pump during the day with a big solar system on the shed roof, you’re cutting your electricity bills in half.

“We can irrigate when people are picking during the day. You can’t run micro-sprinklers during the day, as it will wet their shoes.

“The moment you inject liquid fertiliser at midday, when trees are soaking up water, means it is absorbed straight away. It gives you an edge over pumping at night.”

“It’s essentially a hydroponic system because you are putting fertilizer right on the feeder roots.”

The fertigation system includes two large tanks with 60,000 litre swimming pool pumps to agitate and keep it in suspension. Injection pumps run from the tanks.

The system was designed with two tanks to cater for separate programs for limes and lemons, but it also provides flexibility, especially for lemon production.

“The second tank is particularly helpful for potassium, which can be difficult to make into liquid fertilizer as it’s not that soluble. I can do potassium in one tank and all my other elements in the second.

“Or if I’m putting trace elements down, I can do one tank with trace elements, schedule my computer to inject those first, and then release all the other fertilisers from the second tank.”

Wim said the fertigation program, which changes six times throughout the year, would be very labour intensive if his system was not automated.

Wim sets the program up through Netafim software on a Netafim NMC Pro computer. A Netafim remote connects to the irrigation computer. Wim uses the TeamViewer mobile app on his phone to monitor the system. Issues like burst pipes or faulty valves signal alarms. He also physically checks the pump shed once a week to ensure it is running smoothly.

“I can take ‘x’ amount of litres out of either tank, I can inject both tanks at the same time, inject feritliser, open valves…all through the computer. You can set it up to the last milliliter of what you want to do. At the end of the day, the possibilities are endless.”

The farm is currently producing 70,000 cartons of limes and between 45-50,000 cartons of lemons with all sold into the domestic market. Limes are produced 12 months of the year for cash flow.

Export registration will be completed in March with some fruit to be exported this year to test the market. There will be sufficient volume to export to the level Wim wants in 2022. He will use the next few years to work with contacts he has known for many years in South Africa.

“I believe Australia has an edge over every other country in the world. Asia is on our doorstep and they prefer Australian fruit. We have the golden ticket when it comes to exports but we need to take the opportunity and develop it.” 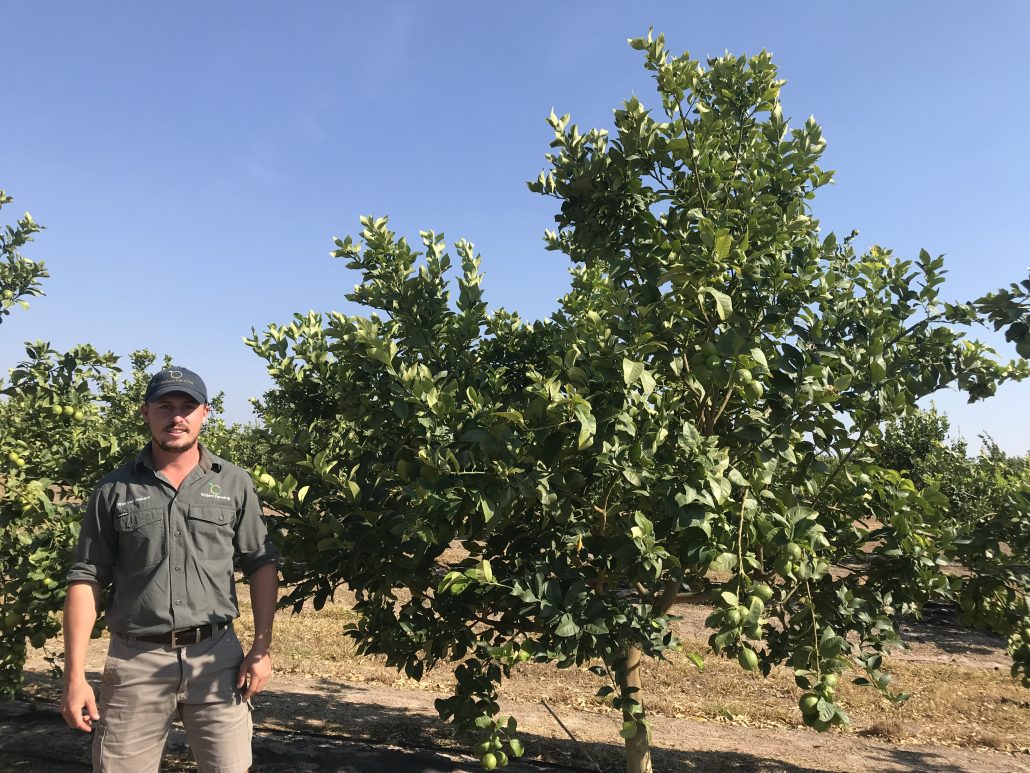 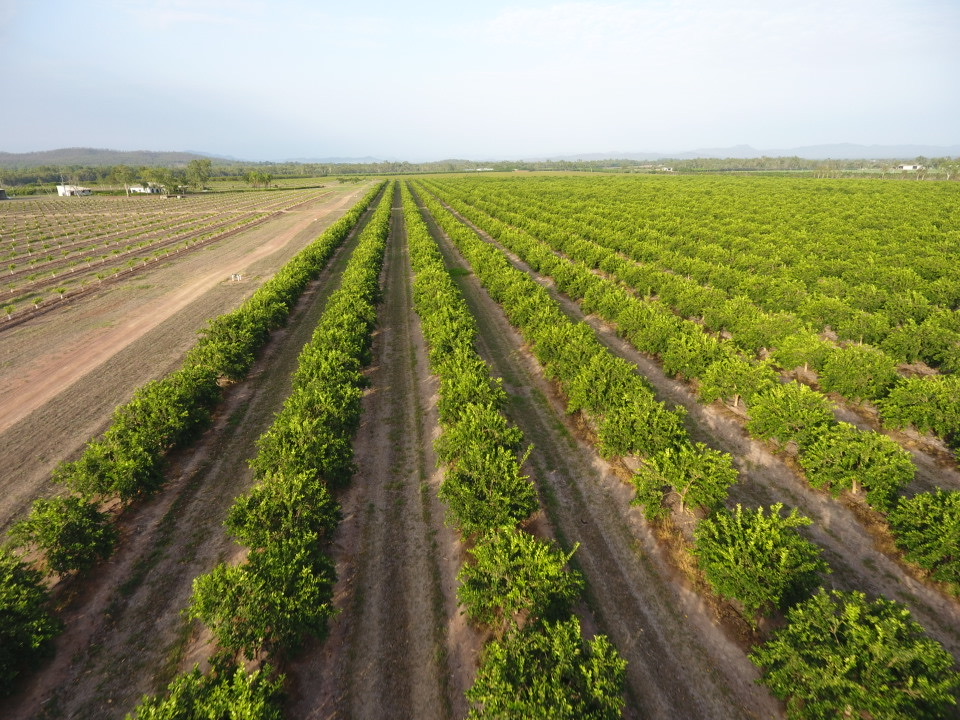 New plantings next to existing trees. 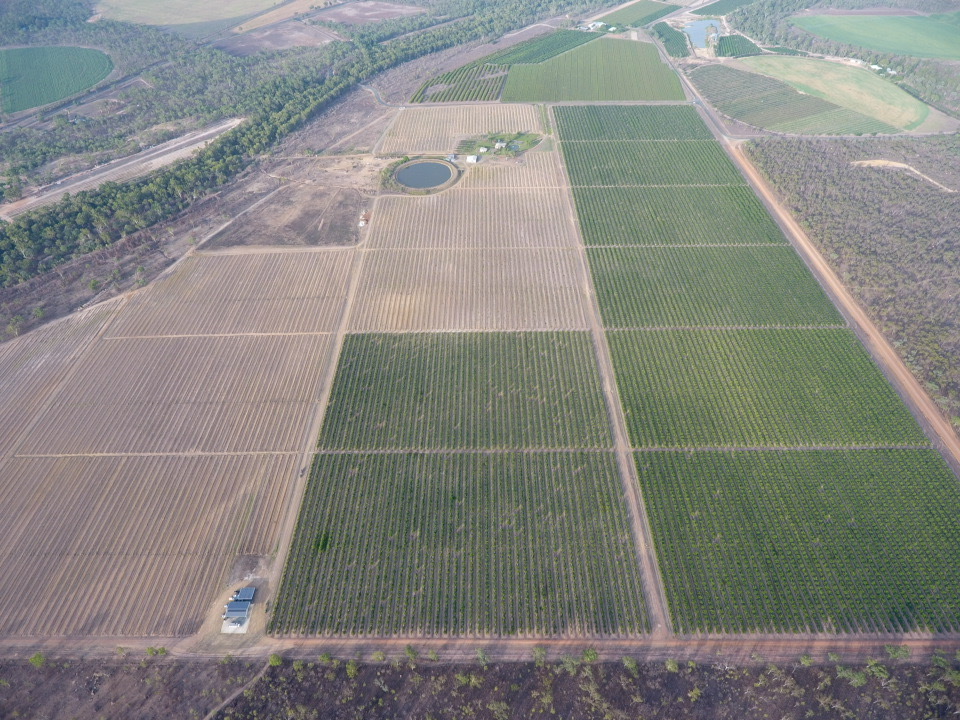 The Dimbulah farm is 120ha with 100ha planted to lemons and limes.