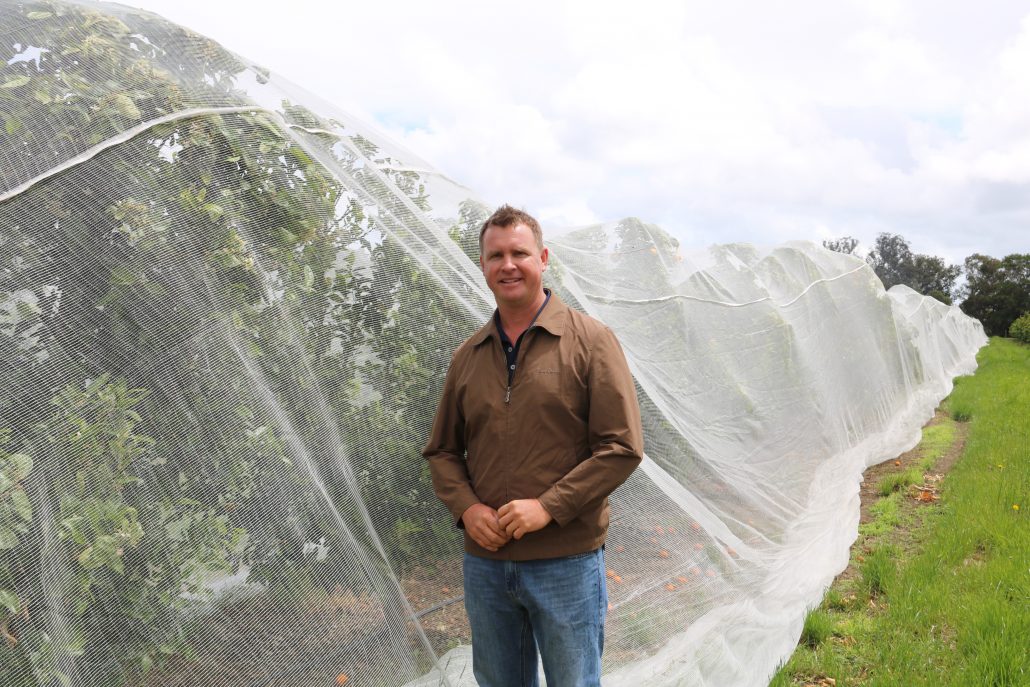 With consumers and retailer preferences moving towards seedless varieties, Richard Eckersley took part in a citrus-netting trial on Yambellup Estate, his orchard in Harvey, WA.

Richard who grows mandarins alongside lemons and oranges, took part in the trial established last year by WA Citrus, drape netting 1ha of Afourers in spring, 2018.

“The big risk for us as growers is not having the fruit available that the market wants,” Richard said. “At the same time we’re concerned about not being able to place our seeded mandarins into the future; that’s definitely a challenge.

“The way demand is heading, if we want to be in the industry for the next 10 to 20 years we’re going to have to have seedless mandarins. So many other growers have them that we have to keep up or we won’t survive.”

The current Citrus Australia definition for seedless fruit is no more than 20 seeds in a 20 piece sample, and no more than 3 seeds in one fruit.

Richard was pleased with the results from the initial trial and netted 8ha of Afourers in September, mainly to keep the bees, and therefore the seeds, out.

“In theory, the nets are supposed to go out prior to flowering but this year we were right on the cusp of flowering when we put our nets on,” Richard said.

“Normally we would put them on mid-September and take them off at the end of October.

“This year spring came on hard and fast. The netting wasn’t supposed to be delivered until the end of September but thankfully it arrived early and we could put it on. That won’t be an issue next season.”

“We had a machine here, a NetWizz from Crendon Machinery [at Donnybrook, south-east of Bunbury], that we’d used in the past on some high-pressure patches of white winegrapes that used to attract a lot of birds.

“We’ve reduced our exposure to winegrapes now but we still had the machine. Going into the trial we weren’t 100 per cent sure it was going to work because it wasn’t designed for citrus, but it did, so thankfully we didn’t have to go out and purchase anything new.”

Richard said although modifications would be needed as the still-young Afourer trees matured and gained height, in 2018 the NetWizz worked perfectly.

“The block has to be harvested prior to putting nets on. It sounds logical but it can be tricky if you’re trying to extend the life of your Afourers for a particular market,that overlaps with flowering.

“For us, it might not be a 100% Afourer netting program going forward, if we want 25% of blocks for a later harvest, we can’t net those ones.

“If the market wants Afourers early, that will help the netting program. If they want them later, we’ll look at harvesting and storing, or leave it on the tree.”

Richard said they will also preference net blocks they know will have a heavy fruit set.

Netting is around $9000/ha but should last for ten years. Richard estimated the costs at putting it on and off between $300-$500/ha.

“We want to see the price differential between seeded and seedless Afourers. If we’re spending $1500-$2000 a hectare, we need to ensure we’re getting that difference in price.

“Some people say fruit is bigger under nets, but we’ve found fruit smaller under our nets. That’s been quantified because we tracked that through the Northern Valley Packers’ shed , who confirmed it.

“I have read articles of people saying fruit is bigger under the net, but was that quantified or did they look at it visually?”

Richard said he would also like more information on spraying.

“It’s said you can spray with nets on but we don’t know if any work has been done on how much penetration you get with sprays.”

Richard and his team are pruning differently.

“We hedged them and took the tops off to make sure the trees are not too large to get nets over, and that there are no branches sticking out the top that would catch the net.

“Ideally, I would like to hedge a bit sooner and try and get a bit of growth on top to soften it so net sits on the top growth.

“This is good management anyway and something I probably should have been doing.”

Richard said they get spring storms that have pulled some netting off and that daily inspection of nets is required to make sure they are in place.

With their sandy loams, they used large pins to pin the net down.

Also in line with continuing to meet market demand for seedless, easy peel mandarins, Richard said he would like to replace his Hicksons and Imperials and is hopeful a suitable candidate might emerge from another trial under way on his property, administered by the state’s Department of Primary Industries and Regional Development (DPIRD).

“The block we have is one of three in WA evaluating different mandarins, oranges, lemons and grapefruit as part of a national HIA project. We have over 30 trees here.”

Richard said the escalating volume of mandarins and oranges being produced in WA meant growers were continually seeking alternative outlets.

“Traditionally 100 per cent of our fruit has gone into the domestic market but we did experiment last year with sending some Afourers overseas and that went reasonably well. We’re now going to spend more time looking at Afourer export with other packers in WA.”