RED scale is a widespread pest of the citrus industry but can be managed if control measures are well-targeted and timed to coincide with specific life stages of the pest.

Red scale’s life cycle starts as a crawler that emerges from underneath the cover of a female scale. It soon settles and starts to secret a wax cover, appearing as a white-cap. From then on, a female scale moults twice to become the second and third instars and mature females. A male scale moults once to become the second instar then pre-pupa, pupa and adult male. Adult male scales have wings and can fly (see Figure 1). 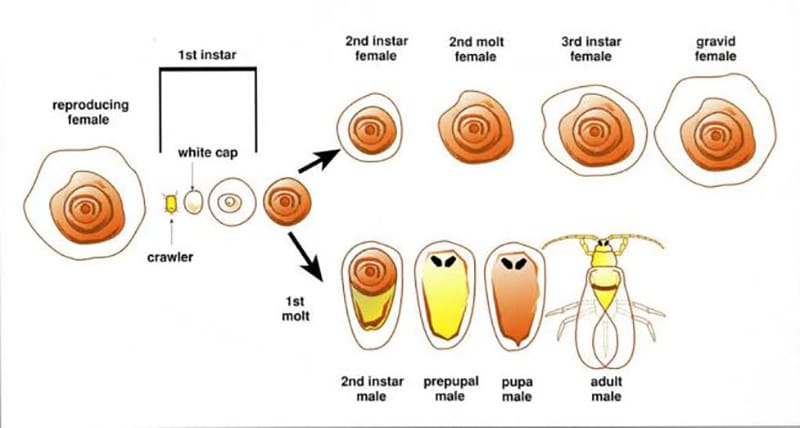 A commonly used chemical spray against red scale in the southern citrus regions is oil plus half-rate chloprpyrifos. The spray is only effective against crawlers and newly settled white-caps. Two of the other registered insecticides, pyriproxyfen (Admiral) and buprofezin (Applaud), are most effective when crawlers have completely emerged and become white-caps.

Red scale crawlers are tiny and difficult to see with the naked eye. To assist citrus growers in timing their red scale control, we have developed a preliminary timing guide based on two season’s monitoring data of pheromone trap catches of adult male scales and seasonal abundance of crawlers in citrus orchards in the Riverina and Sunraysia. 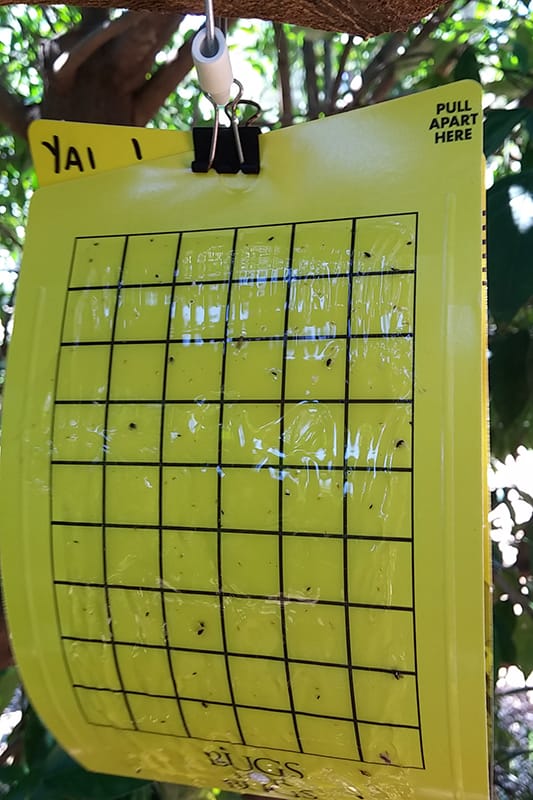 Monitor red scale by placing pheromone traps that consist of a yellow sticky card and pheromone lure to determine the stage of the life cycle the pest is in, to help with pest management.

Our pheromone trapping data showed a series of male flight peaks. There was a regular peak of male flights between mid-September and mid-October. From this peak to the following crawler peak, there was an average gap of 428 degreedays (DD) above 11.7ºC. Table 1 shows the number of days before the next crawler peak when a male flight peak is detected between 1 October and 15 December. The estimates were obtained using long-term average monthly temperature data from the Bureau of Meteorology (BoM).

For growers who do not use pheromone traps, the following table shows the average catches of adult males and crawlers across all sites and seasons in data analysed so far. Male catch (male flight) in the Riverina and Sunraysia was highest during March and April and lowest during June through to August and in November. Crawler numbers in the Riverina and Sunraysia were highest in November, followed by December, April, and May and lowest during June to September (Table 2).

For growers who plan to release Aphytis wasps, timing of peak male flight is also a good indicator of the time when virgin females are abundant. The two stages need to be around the same time for reproduction. Virgin female is the preferred stage for Aphytis wasps to parasitise.

This timing guide will be updated when new data become available. An online degree-day calculator will also be published by the end of October to allow growers to use actual temperatures to predict male and crawler peaks.