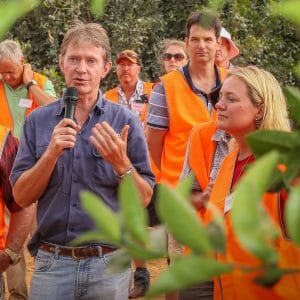 MFC works with growers on chemical use

Afourers can produce yields of up to 100 ton per hectare in uncontrolled trees in year 8, but falling yields from the tenth year have prompted trials at Costa Exchange farms to reverse the trend.

Nutrano consultant David Stevens told the Citrus Technical Forum that Afourers “are a very easy tree to get along with for the first 8-10 years.”

Yields of up to 100 ton per hectare can be achieved on uncontrolled trees in good health on dense plantings – more than 650 trees/ha – in year 8.

However, once trees start to look congested with crossover limbs and dead wood the yields fall.

“Smaller pruning cuts have very limited regrowth with little fruiting potential and Afourers do not like to reshoot lower in the canopy without severe limb pruning.”

David said following season’s yield for Afourers will be affected by over cropping in any season, and by extending harvest into September or later.

“If the season needs to be extended, harvesting between hedge rows will help following yield,” he said.

“Early pruning in the tree’s life will also help with annual balance cropping in the present and future.”

Mr Stevens said scaffold limb replacement after year five is considered essential by most growers with tree over 10 years old.

“Most growers who have left this to later in the tree’s life wished they’d started earlier.”

David said afourers tend to fruit at the top and grow long unproductive middle branches, so Y pruning and severe hedging are options to consider.

Andrew Harty and the team at Costa have conducted both Y pruning and severe hedging trials at Costa’s Kangara farm at Murtho, SA, over the past 2 ½ years.

Andrew said the Y pruning concept was pioneered on Satsuma mandarins in New Zealand. It exposes the inner canopy to light by cutting a wedge into the top of the tree.

This helps achieve ‘walls of fruit’ on the inner faces and is similar to having two small trees on a mature trunk.

Trees were lightly hedged on top and sides, 3-4 upright scaffold limbs were removed and stubs were intentionally left to encourage lower shoot growth.

“Bending and tucking regrowth shoots may be better than ongoing cutting,” he said.

Andrew said ‘walls of fruit’ – similar yields to the peak – have only partially been achieved after three seasons.

“It’s too early to say if we’ve stabilised yield and bearing pattern,” he said.

A severe hedging experiment – using machines to hedge the sides and tops of afourers – was trialled in September 2017 to see whether expensive manual pruning could be avoided.

In the first season after hedging, there was a light crop and strong regrowth on the hedged side. Hedged trees returned 42t/ha, compared to 56t/ha on unhedged trees.

In the second season after hedging, Andrew reported a good fruit set for the 2019 harvest, and said they may only need to hedge one side every 3-4 years.

MFC works with growers on chemical use Citrus Australia congratulates Prime Minister Morrison and looks forward to... Scroll to top