Griffith citrus grower Mac Burge thought he had a problem.

Mac wanted to upgrade the existing gravity pipe and riser irrigation system on his 18.6 hectare citrus orchard to a more efficient and less labour-intensive drip irrigation system, but at the same time Mac did not want to increase the energy input or carbon footprint of his operation.

Mac concluded that solar power would be an essential part of any solution to his problem. But, existing drip irrigation systems generally require constant pressure, which is difficult to achieve with solar due to continuously varying solar radiation levels.

However, after meeting several irrigation companies, he met local irrigation designer Andrew Ryan from SolarDrip, who was confident he had a solution in what he describes as an industry first.

Andrew designed and deployed an autonomous, solar powered, drip irrigation system with an emphasis on simplicity.

“In a nutshell, drip irrigation can be a great solution for irrigation efficiency, but unfortunately it has created an energy usage problem, which in turn increases ongoing input costs,” Andrew said.

“I have focused on reducing energy costs, whilst maintaining all of the benefits of drip. I’m not getting rid of or compromising any benefits of drip irrigation, I’m just focusing on improving energy efficiency.”

“On Mac’s farm, we have installed a robust drip irrigation system like any other. Mac installed 30 kilowatts (kW) of solar panels as he wanted a new irrigation system to work effectively on solar without the upfront and ongoing costs of grid connection, whilst also working towards his goal of his operation being carbon neutral.

“The system is designed to irrigate the whole farm at once if required and it will automatically adjust application rate based on solar radiation, the key to the patented SolarDrip technology is to effectively have a variable application rate whilst maintaining application uniformity.

Mac now has a system that:

Under the new watering system, he said he has produced better quality fruit and has not had any problems with the system keeping up to his trees’ needs, or with the transition to drip irrigation. The current system uses 80ML a year for his orchard, compared to 110ML under the old system.

“I was aware of potential issues with production with the change to drip irrigation, and I was conscious of keeping water up to them last year when the system turned over, but there have been no issues.”

Mac will look to install a battery in future to store excess energy created by the solar panels when the irrigation system isn’t being used. This energy will supplement energy usage in his home and sheds.

To plan for the new system, Andrew calculated the maximum application rate for the crop at full maturity, using historical evapotranspiration (ET) data and the maximum variable crop factor for citrus in the Griffith region. A maximum daily water volume of 1.6 ML per day would be required over an 8-10hr window of sunlight each day.

“To ensure the system can exceed the maximum crop usage requirements, it is configured to provide average daily output of over 1.6 ML per day,” Andrew said.

“I often get asked if the SolarDrip technology can deliver enough water. I believe Mac used around 80 ML last season, if Mac just left the system on all of last season, he would have pumped 500 ML, indicating there is more than enough capacity to handle the peak demand periods”.

“Lateral diameter must achieve velocity that generates turbulent flow to scour intermittent build-up of debris,” Andrew said. “At the same time, tube diameter must minimise friction losses along each lateral.”

Mainlines were selected to ensure that all blocks can be supplied with the necessary flow and pressure at the same time. All individually isolatable (valved) blocks irrigate together if required at the maximum flow rate, whilst minimising friction losses throughout the mainline piping network.

Once pump duties were determined, the pump, filtration and solar power requirements were selected. A 30kW solar system was required to effectively power the 22kW pump. The pump controller is a simple on/off switch.

“The system is designed to exceed maximum ET requirements for the citrus crop and may be manually or automatically controlled to avoid potential over irrigation,” Andrew said.

“Additionally, the pump can be set up to turn on and off at minimum solar radiation levels. This level is detected by a simple sensor and the minimum setting can be easily adjusted to fine tune the actual application rate being delivered each day.” 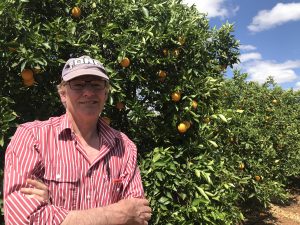 Mac Burge on his Griffith farm during the Riverina Regional Forum last year. 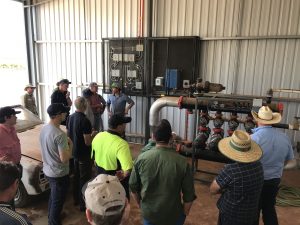 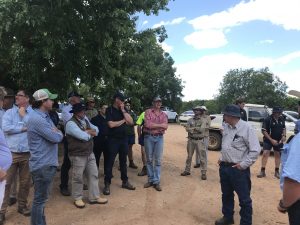