Remote sensing of citrus blocks can give an early indication of eventual yield, Professor Andrew Robson of the University of New England says.

“Basically, we’re measuring something without physically destroying it,” Andrew said.

“There are lots of tools that do it – some are really good, some are in the evaluation stage – but they all provide useful information if used appropriately.”

Andrew said for the first time he could present results specific to citrus.

“This work was done in Western Australia with Moora Citrus.

“We evaluated satellites and planes over Moora to work out whether we could measure tree health and how to correlate that with given quality.

“At Moora we identified seven different blocks: some Washington navel, some mandarin.

“We looked at the variability in those blocks and tree health and selected locations that represented high, medium and low growth.

“We captured it in February, which was basically final fruit set, and in May, pre harvest.

“We also used the WorldView satellite provided by NASA at a cost of $22 per hectare.”

Andrew said the first priority was examining variability in each block.

“If you’re a grower looking at all your farm, it’s useful to see which spots are performing well and potentially which ones aren’t.

“We classified each block separately so we got that variability of high growth meeting low growth.”

“We built a relationship between the canopy reflectance from all these points, then did a forecast. We applied that and got a prediction of the average kilograms per tree.”

Andrew said figures recorded at harvest showed the accuracy of projections based on pre-harvest sampling had been “quite high”.

Attempting to apply an algorithm developed in one crop in one year to another situation was “dangerous”, he said, but remote sensing required fruit on only 18 trees to be counted as opposed to the 70 typically sampled by Moora Citrus’s Shane Kay when preparing estimates.

He warned that the more “time and effort we spend on those 18 trees to get it right, the more accurate the calibration is”.

Andrew said the next step would be moving into a three-year federally funded project to identify the most effective sensor for yield forecasting and at the same time map all commercial citrus Australia-wide, starting with a continuation at Moora Citrus and extending to the Mildura and Riverina areas to produce an accurate overview of not only existing plantings but also industry expansion. 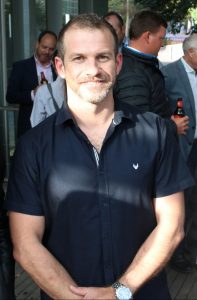