Aphytis melinus is a parasitic wasp that was introduced to Victoria in 1961, when red scale was spreading rapidly and causing serious problems in citrus orchards.  For the next decade, the parasitic wasps were released throughout the southern citrus districts and significantly reduced red scale populations.  This resulted in the first commercial insectary in Australia in 1971 – Biological Services in Loxton. Since then A.melinus  has been widely used by growers.

To maintain good populations in their orchards, many growers release extra wasps each year. The wasps control red scale naturally, and many orchards still only require occasional back-up controls with sprays.

A.melinus reproduces by laying its eggs inside nymphs and crawlers of red scale. The wasp larvae grow inside the immature scale, eventually killing the scale. One or two new parasitic wasps emerge from each parasitised red scale, to continue the process.

To improve establishment of parasitic wasp populations, and increase their effectiveness, growers should employ practices that reduce dust, raise humidity and reduce summer temperatures. For example, the use of cover crops between rows, vegetation on borders, windbreaks and irrigation is known to be effective. Parasites also work well under netting which is becoming popular for wind and hail protection. Large populations of ants are detrimental for all beneficial insects and where ants are in high numbers, baiting is recommended.

Some of the newer chemicals available for red scale control are not directly toxic to parasitic wasps. They are also very effective against scale because of their systemic nature or residual activity. However, these chemicals mostly control the young early stages of scale development, which means they remove a significant portion of the scale population that A.melinus can attack. The result of removing young scale is that wasp numbers are also reduced. To avoid wiping out the wasp population, IPM specialists recommend that growers avoid spraying whole orchards at any one time and avoid repeatedly spraying the same chemical in one season, or subsequent seasons. Preferably, avoid using systemic-type chemicals as a preventative strategy. Only use systemic chemicals to control scale where necessary. This is appropriate for general pest control, because overuse or regular use of certain chemistry will eventually lead to chemical resistance, and then these valuable tools will be lost.

Releases of parasites should commence in spring and continue through summer and autumn.  Nearly all red scale over-winter as adults, which A.melinus cannot parasitise. Therefore, top-up releases of parasites should occur in spring, when the next generation of scales start to appear. Further releases should occur after toxic spray use, and after significant periods of severe heat.  Parasites are most active in autumn and releasing is still worthwhile in March/April. However, research has shown that releases in spring and early summer lead to the highest wasp populations later in the season.

Best practice with many larger growers is to release modest amounts of parasites throughout the year into areas of low to moderate scale history, and into varieties that do not need harsh chemical treatments, on boundaries, and for replenishment after chemical use or heatwaves.  Using this strategy combined with a sensible IPM plan will help to limit scale outbreaks, reduce pesticide resistance, and maintain a healthy environment.

James Altmann is Owner/Director of Biological Services in Loxton, SA. 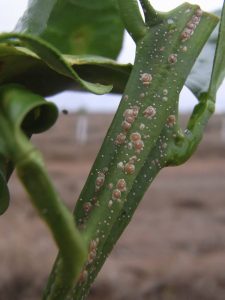