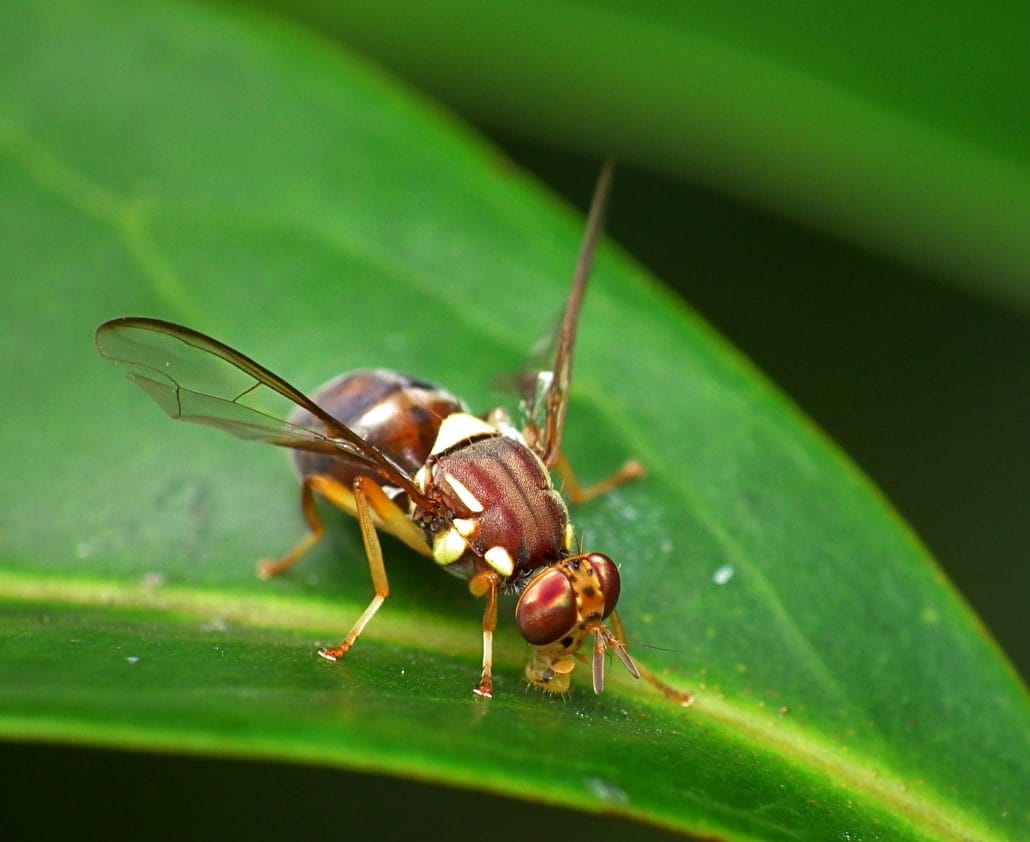 Now that Queensland fruit fly (Qfly) is established in regions that were previously thought too cold for the insect, asking questions about winter survival mechanisms seems reasonable. To effectively answer these questions there is a need to revisit the biology of the fly to get to the bottom of it all and to understand if Qfly behaves in the same way in colder regions as other flies. Understanding over-wintering behaviour is important for treating the Qfly population entering the winter period and for being on top of spring emergence and spring fly condition.

Let’s go back to basics and look at what we know already. Insects in cooler, temperate areas generally survive the cold winter months through a mechanism of diapause, where the insect shuts down in response to cold temperatures and/or changing day length. In temperate fruit flies, this shut-down usually occurs in the pupal stage. But Qfly is a tropical insect that doesn’t have a true shut-down mechanism. However, colder temperatures can slow development because insect aging is related to the temperature. This means that as the weather cools the larval and pupal stages can be prolonged. If development is prolonged too much, the insect (be it egg, larvae or pupa) will eventually die. Is this what happens in Qfly? In a word – no. Based on significant research, Qfly is considered to survive winter as an adult insect.

So, what has Qfly research told us about over-wintering? Research in Stanthorpe, a cooler part of Queensland, done in the 1920s showed that some pupae could survive the winter months but this was literally a few individuals out of thousands tested and it was concluded that the flies survived primarily as adults. This was subsequently confirmed in the 1960s and ’70s in central NSW by CSIRO and the University of Sydney, and then by Victorian Government entomologists in the early 1980s. But one study from NSW in 1939 found evidence of very prolonged larval development in late-season apples and citrus, so this was suggested as another possible over-wintering mechanism.

Entomologists from Victoria looked extensively at over-wintering behaviour in the 1980s. Using an outdoor screen-house in Melbourne, it was shown that there was no emergence of flies in June, July or August and pupae died during winter. However, flies emerging in April and May could survive as adults through to the spring. Findings showed that:

Now the question becomes ‘What are the conditions Qflies encounter in Victoria and NSW, and are these research findings applicable to real world conditions?’ After April, in both NSW and Victoria, it has been observed that the cool temperatures do not allow the development of eggs and larvae and young adults will remain sexually immature until warm weather returns, as was described in trials. Any mature females will, however, continue to lay eggs into late autumn/early winter (but those eggs will not hatch).

Adults aggregate and spend the winter sheltering in protected sites with a heavy canopy. In one series of studies in NSW, the flies were observed going back to the same over-wintering site each year. In very cold weather the flies can simply rest under leaves, but on occasional warm days they might fly around to feed and drink. Flies exposed to decreasing temperature conditions over time can survive cold conditions better than flies moved directly from warm to cold conditions (i.e. they acclimatise to increasing cold), making flies from southern Australia more cold-hardy than flies from subtropical and tropical Australia.

The Victorian work is now more than 30 years old, and with increasing temperatures and fewer really cold winters, the flies may successfully develop much longer into the winter and start again earlier in the spring. New overwintering behaviour trials are being undertaken right now in Victoria by Katarina Merkel and Dave Williams through the project Adaptive area wide management of Qfly using SIT (ST15014). This came about after working with growers in the Cobram region, who highlighted the lack of knowledge of over-wintering in cooler climates as a major impediment to management. New results will show if Qfly behaviour has changed over 30 years so we can better target management options in cooler regions. It may even be possible that the temperatures are now warm enough that breeding can occur all year round.

Regardless of where you are, keep a good lookout for this pesky pest and adopt an area-wide management (AWM) approach, consider all habitats (non-crops included) in the landscape, think year-round, and don’t make it easy for them to over-winter (clean up any postharvest or fallen fruit).

The project Adaptive area wide management of Qfly using SIT (ST15014) is supported by Hort Innovation and CSIRO through funding from the Australian Government Department of Agriculture and Water Resources’ Rural R&D for Profit program.