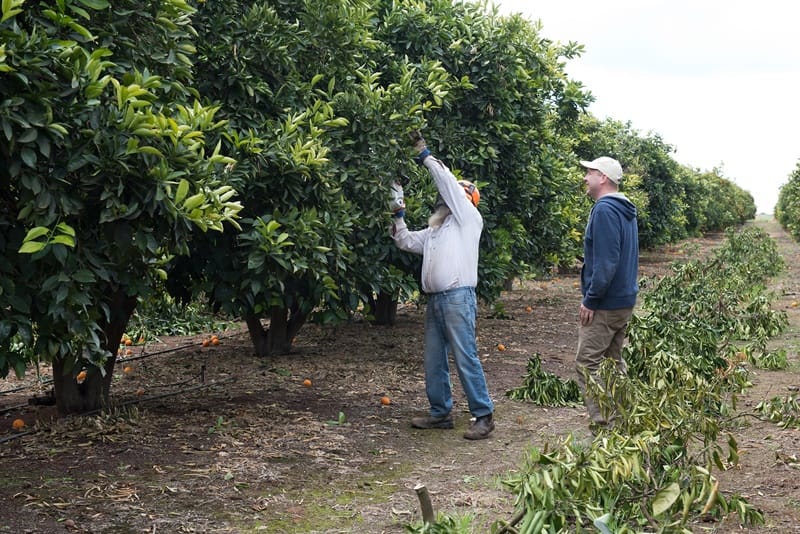 Owner of Cox Citrus Adam Cox (rt) and pruner Peter Letcher (lt) getting on top of the pruning in one of their Washington Navel blocks.

South Australian citrus orchard manager Rick Pierce of Cox Citrus has some clear and simple advice to improve the production of high-quality fruit: “some pruning is better than no pruning”.

However, his approach is more nuanced than that, with a focus on pruning immediately after harvesting wraps up and with an aim to remove 20 per cent of the canopy every year.

The Cox Citrus orchards are located at Sunlands in the Riverland region of South Australia along the Murray River. On about 90 hectares they grow early, mid- and late-season navels, M7s, navelinas, Washington navels, seedless Valencias, lemons, blood oranges, tangelos, Imperial mandarins, Sumo Citrus™ and the new pink-fleshed navel Cara cara. For all varieties, Rick aims to start pruning as soon as he can after harvest.

“It is a big commitment to start pruning after harvesting because there are all the other cultural practices to implement, including fertilising, weed control, nutrient sprays and, later in the pruning season, pest control,” said Rick. “But we’ve made it our number one rule: once the fruit is picked it’s time to prune.”

Rick said the reason to prune at this time is because the tree used so much energy during flowering.

“If you can remove unwanted timber and unwanted limbs before bud initiation you return that potential energy into the remaining canopy of the tree and that gives you a better flush for the following season.”

Importantly, pruning early supports the production of high-quality fruit for the coming season.

“Our style of pruning encourages a canopy that allows mottled sunlight throughout the tree, which supports even-sized and earlier-ripening fruit,” Rick said. “We mostly hand prune and aim to remove about 20pc of the canopy every year.

“Removing up to 20pc of the canopy encourages leafy infloresences to get stronger flowering and larger fruit, but if we remove more than that, then we get too much vegetative growth.” 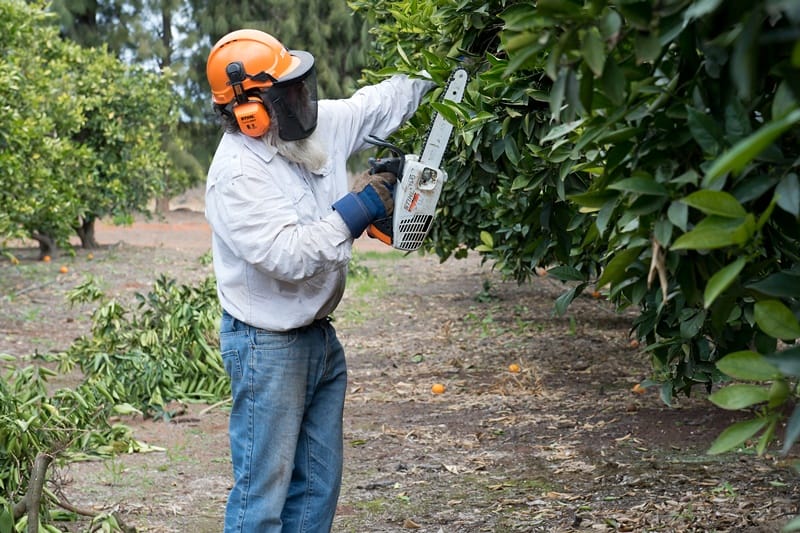 At Cox Citrus orchards the aim is to prune 20 per cent of the canopy every year.

Opening up the canopy enables the trees to get more internal growth close to the trunk, with pruned trees producing up to 35pc of the fruit on the inside of the tree. This canopy structure also supports good spray penetration and the fruit does not get wind marks as there is less dead wood for it to rub against.

From a profitability perspective, Rick’s yield and value figures have convinced him that pruning is the way to go. He gave an example of a block that yielded 35 tonnes/hectare of good-sized fruit achieving good returns. When the block wasn’t pruned for two years, the yield increased to 45t/ha but the returns were down by 30pc.

“We have always sold fruit on reputation,” said Rick. “That particular year I wasn’t receiving as many phonecalls from packing houses as we didn’t have the same even and uniform fruit size.”

“We explain why the trees need a certain structure, why we prune, how we prune, what we are trying to remove and that we are trying to keep all the good healthy limbs,” said Rick. “It’s quite a process to get it right but we’ve found that the trees respond best to the hand pruning because you can be selective about what you cut out.

“We do shoulder pruning and skirt the trees but we don’t open them up more than they need be so that the canopy still provides some frost protection.”

Rick said if any grower wanted to produce high-quality fruit then pruning after harvesting should be on their ‘to do’ list.

Thank you to Rick Pierce for sharing his time and knowledge to prepare this article and for taking photos at Cox Citrus orchard to show its pruned trees.