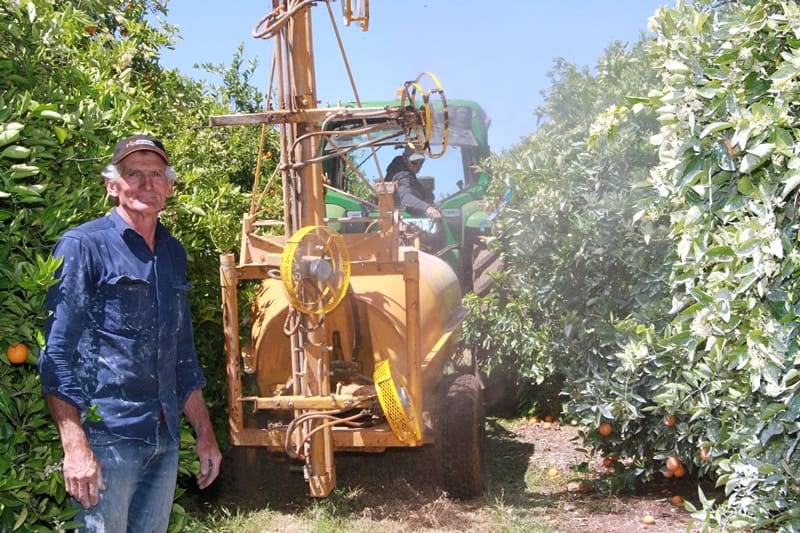 Citrus gall wasp is proving an insidious pest and is making its presence felt in all citrus regions across Australia.

An industry project funded by Horticulture Innovation Australia is underway to develop national strategies to manage this pest.

During 2015–16, two large-plot field trials of Surround® were conducted in the Sunraysia and the Riverland to investigate its potential in citrus gall wasp control.

One trial was held on the Buronga, NSW, farm of Kevin Cock, who have 32ha of citrus, including early-, mid- and lateseason Navels, mandarins, Valencias, and seedless Valencias.

“We’ve had trouble with gall wasp, particularly one patch, over the last three years,” Kevin said.

“I haven’t wanted to use a strong insecticide, because it messes up my integrated pest management (IPM) plan. Cost is another big factor when considering options, as we are a high cost country, so it’s important to have low cost options.”

Kevin and son, Nathan, agreed to take part in trials of Surround — a protectant against sunburn and heat stress — under the guidance of Jianhua Mo, a research entomologist with the NSW Department of Primary Industries.

Trials on the Cocks’ property were conducted in the most heavily infested patch.

Nathan has used the sprayer to apply different rates of Surround under a detailed plan.

The Sunraysia trial showed that two applications of Surround® just before and during the middle of gall wasp emergence greatly reduced the number and size of galls.

In particular, the number of large galls (>100mm) was reduced by 99%. The Riverland trial showed similar results.

“It appears that the barrier film of Surround® on the plant surface also deterred egg-lay by CGW on citrus shoots, resulting in a reduction of gall size and abundance in the following season,” Dr Mo said.

Dr Mo said Surround® sprays at the trial rates may be too expensive to many growers, an important factor, according to Kevin.

In addition to the Surround® trials, two field trials of Samurai® and Confidor® Guard have been conducted for the control of CGW larvae.

“Both were effective against CGW when applied in the soil, although the level of reduction in galling was not as high as that by Surround®,” Dr Mo said.

More trials to be held this year will investigate the scope of reducing Surround® rate and the impacts of Samurai® on beneficials in citrus.

On the front foot against exploitation