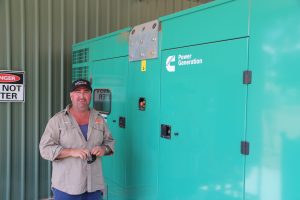 Rohan McMahon with his new generator.

Powering ahead with expansion at Ellerslie

An ever-present threat of interruption to his mains power supply has prompted Rohan McMahon to electricity matters into his own hands.

“In Australia we’re not putting any more power plants in and we’re getting more and more areas blacked out in summer,” said Rohan, who farms on the Darling River at Ellerslie, about 45km from Wentworth, in south-west New South Wales.

“We can’t afford that, because of course it never happens when it’s cool and wet.

“The fruit size we can lose over a couple of days in hot weather is bad enough but after a week without irrigation it would cost us our whole crop.”

Rather than continue farming with that risk hanging over his head, just over two years ago Rohan had his property fitted out with a 200kW generator.

“It’s bigger than we needed but we had to go to that size to get fuel efficiency,” he said.

“The bank kept asking if we could insure our fruit – well, this is that insurance.”

At the other end of the spectrum Rohan has guarded against having his trees damaged by the opposite extreme in winter, installing nine frost fans.

“There’s a lot of expense involved with both but we had to have them. We’re never going to stop those things happening but now at least we’re prepared for them and can mitigate the effects as best we can.”

The fans cover most of the 73ha of citrus on Rohan’s 121ha farm.

“They’ve saved us quite a bit of money already this year,” he said. “The hours have varied, depending on where they’re sited, but the lowest has done 141 hours and the highest 226.

“We put them in because it’s been so dry these past few years and frost causes such a setback in younger trees. Half our block’s only a few years old.

“I was away the first time they kicked in. My daughter Rebekah [who works with Rohan on the farm as a team leader] rang and said it sounded like helicopters were about to land on the property.

“Actually, the sound isn’t too bad. It was worse when my neighbour first put one in. I used to wake up and hear it at night and think ‘God, I wish I had some of those’.”

Rohan has also built two other structures: a combined office and meal-break block and a separate chemical storage.

At the same time conduit was laid as the first step in erecting a large shed to house the farm’s implements.

The expanse of roof will support up to 400 solar panels, generating a further 100kW of electricity and potentially allowing Rohan to operate entirely off-grid or be power-cost-neutral. 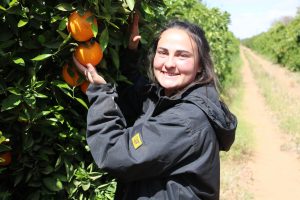