Postharvest fruit washing with water containing a sanitiser is an industry standard practice to clean and sanitise the fruit.

There are many chemical sanitisers which are widely used in the citrus industry, including chlorine and peracetic acid (PAA, e.g. ‘TsunamiTM’).

Each of these different sanitisers have their own merits and applications depending on the situation.

EW is produced by running the wash water through a series of cells and applying an electrical current (electrolysis).

If required, the water is automatically dosed with small amounts of dissolved table salt to increase electrical conductivity.

This process produces a range of different chemicals in the water, including hydrogen peroxide, ozone, hydroxyl radicals, hypochlorous acid and free chlorine (Cl2).

Most are highly reactive but shorted lived chemicals. EW is safe and has been shown to destroy pathogens and chemicals without compromising safety or the environment.

As part of the Hort Innovation citrus postharvest project, we examined the effect of different measurable chlorine levels in Unipolar® EW system against standard sanitation treatments on general sanitation and the development of green and blue mould in artificially inoculated oranges.

Unipolar Water Technologies Pty Ltd supplied and ran the EW system for this trial at a commercial citrus packinghouse in the Sunraysia. Unipolar is an Adelaide-based Australian company.

The trial was conducted in two parts: (1) treatments in controlled conditions and (2) treatment in the commercial packingline.

This trial examined the effect of different sanitiser treatments under controlled conditions (dipping in tubs) (Image 1).

The concentrations of sanitisers used in the trial were verified with digital measurement systems. 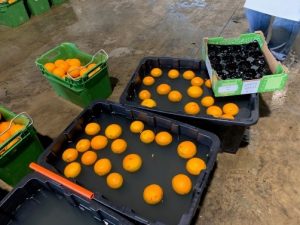 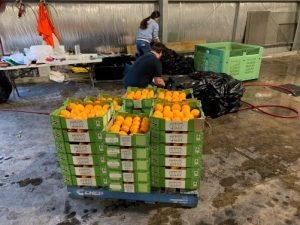 All the sanitising treatments, Unipolar® EW system (set at 5, 10 and 15 ppm free Cl2), chlorine as hypochlorite and PAA all had few detectable colony forming units (Figure 1a) and yeast and mould counts (Figure 1b) in the wash water, as compared to the control (packinghouse water).

These results demonstrate the presence of micro biologicals in the packinghouse water coming into the packinghouse but shows that all sanitation treatments resulted in significantly lower total bacterial plate count and yeast and mould counts. This is a good result and justifies the use of sanitisers. 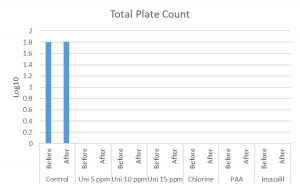 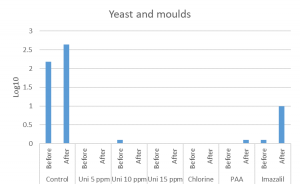 Figure 2a. Effect of the different sanitation treatments on (a) total plate count in water ;

Figure 2b. Yeast and mould count in water in controlled conditions. Water samples were taken before and after fruit treatment.

Fungicides are designed to prevent postharvest pathogens and as expected, the application of the postharvest fungicide, imazalil completely prevented green and mould development (Figure 3).

Sanitisers are not used to prevent postharvest decay and this is seen in Figure 4 which shows there was no difference between Unipolar® EW system (set at 5, 10 and 15 ppm free Cl2), chlorine as hypochlorite and PAA in the rate of green and blue mould infection and size of infection following artificial inoculation of the fruit (Figure 2). A follow-up of the levels of natural development of postharvest decay on fruit that had been stored for one month showed there was very natural low infection rates in the fruit and there was no effect of any of the different sanitiser treatments on postharvest decay. 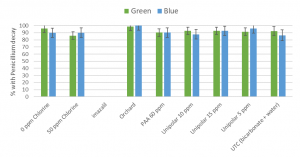 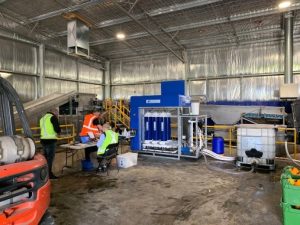 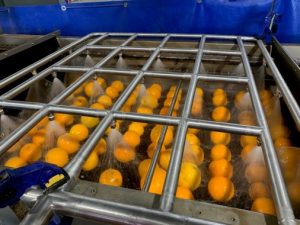 Image 2a The trial Unipolar® EW system in the commercial packinghouse

Image 2b Treatment of oranges with Unipolar® sanitiser sprayed over rolling brushes in the packingline.

Water samples were measured before and after treatment of the fruit and the results showed there were low total colony forming units and yeast and mould counts before or after dipping the fruit.

In this packingline, the ‘TsunamiTM’ treatment (peroxyacetic acid and hydrogen peroxide) had lower total colony counts but higher levels of yeast and mould, showing that the PAA has more difficulty in controlling yeast and moulds than bacteria. 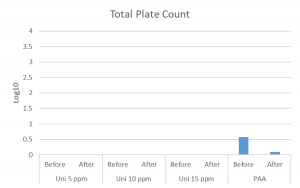 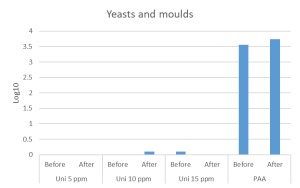 Figure 3. Effect of sanitation treatment on total plate count in water (left) and yeast and mould count in water (right) in commercial packingline. Water samples were taken before and after fruit treatment.

There was no difference between the different sanitiser treatments on the incidence and growth of blue and green mould where the decay spores were artificially inoculated into the fruit before treatment.

All sanitisers, i.e. chlorine as hypochlorite, PAA and Unipolar® EW system (at 5, 10 and 15 ppm free Cl2), were effective in reducing detectable colony forming units and yeast and mould counts in the wash water.

This action is their primary function as sanitisers and why they are used in postharvest horticulture.

In addition, the sanitisers had no effect on green and blue mould decay. These results were expected as sanitisers only clean up the wash water and no not control postharvest decay.

The manager at this citrus packinghouse has since installed this Unipolar® EW system this packing season (2020).

At the end of the packing season (December), the manager reflected on the use of the Unipolar® EW system and was happy with its ease of use and efficacy.

In addition to successfully sanitising the wash water, the main benefit has been lower maintenance and running costs without the use chemical sanitisers, i.e. no chlorine or PAA (although it does use table salt (sodium chloride) to help with the electrolysis).

In addition, the EW system was reported to have an unquantifiable benefit on fruit storage and shelf life, with lower levels of decay during shelf life.

The manager also noted that the EW system had been gentler on machinery wear and had reduced maintenance costs in the packingline.

The use of other sanitisers such as PAA which have low pH, can be corrosive to drive chains and gears in the packingline.

The manager commented that while the EW system had an initial high installation cost, it was relatively economical to run and was happy with the decision to install this sanitation system in his packinghouse.

This article is a contribution from the Citrus Postharvest Program (CT19003) funded by Horticulture Innovation and NSW Department of Primary Industries. The authors would like to thank the citrus grower for organising and assisting in these trials. They also thank Unipolar Water Technologies Pty Ltd for running their equipment and assistance in the trial.