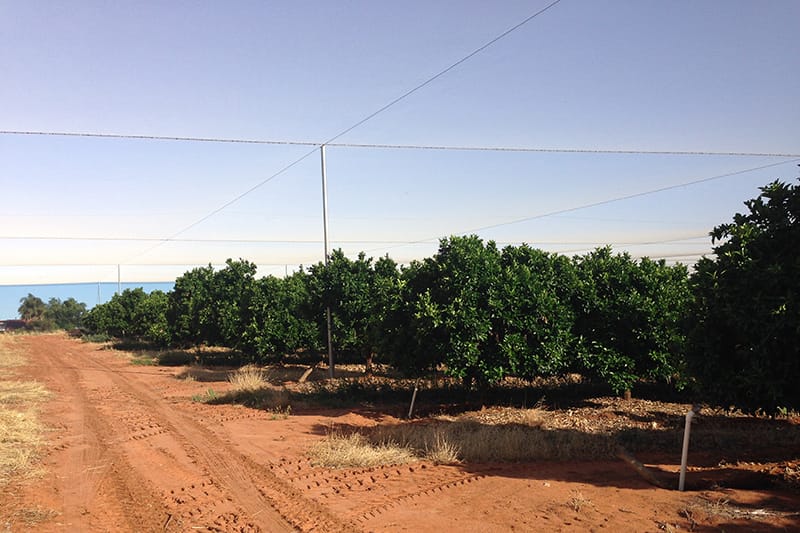 To enable the scientific study of the trial site, instrumentation has been established at both properties with the participation of the University of Adelaide to enable the monitoring and comparison of a range of climatic and soil water indicators between netted and control sites.

Information and data being gathered include the effect netting has on mitigating hail damage, the incidence and effect of frost events, canopy structure and leaf area, fruitfulness, fruit quality and grade by variety. These monitored outcomes are being measured against crop water use, nutrient inputs and the efficacy of integrated pest management (IPM). As the project progresses, the summary findings are enabling the development of cost-benefit analyses that consider the worth of the system against the total cost of investment in the netting infrastructure.

Pyap produce co-owner Ryan Arnold said he had been very impressed with the outcomes of the netted trial.

“We have had some great improvements with overall fruit quality but particularly with navels, where there has been a big reduction in wind blemish and fruit appearance,” Ryan said. “Overall, I would say that netting has enabled us to get more consistent higher-class pack-outs and that is improving our fruit marketability.

“Additionally, we have found with varieties such as Afourer mandarins that we have been able to use the netting to reduce cross-variety pollination of the trees and this has improved our seedless outcomes.

“From a crop management perspective, we are finding that the efficacy of spraying is much better under the netting as well.

“I would say that overall we are using probably 10-15 per cent less irrigation water on the netted sites and getting instances where up to 30pc higher yield is achieved, with associated quality improvements. We are currently considering expanding our netted areas based on the results of the trial.”

Recent monitoring data compiled by the University of Adelaide shows clearly that solar radiation inputs are greatly reduced under netting (25pc less in some cases) and the flow-on effect of this is that evapo-transpiration is also reduced in the summer growing season. This reduction in early-season crop water stress is being linked back by both researchers and growers to better tree vigour at flowering and better fruit set.

In addition to this, monitored parameters such as soil temperature and wind speed were found to be much lower under the netting compared to the control, indicating the potential for increased chill in the winter period and protection from damaging wind gusts. Wind gusts of up to 125km per hour measured in March 2017 outside of the netting were found to be a mere 18km/hr under the netting. This example provided insight into why fruit quality was improved under netting.

To find out more about the project (including future updates) contact Jeremy Nelson, project officer Natural Resources SAMDB, on 08 8580 1800 or jeremy.nelson@sa.gov.au