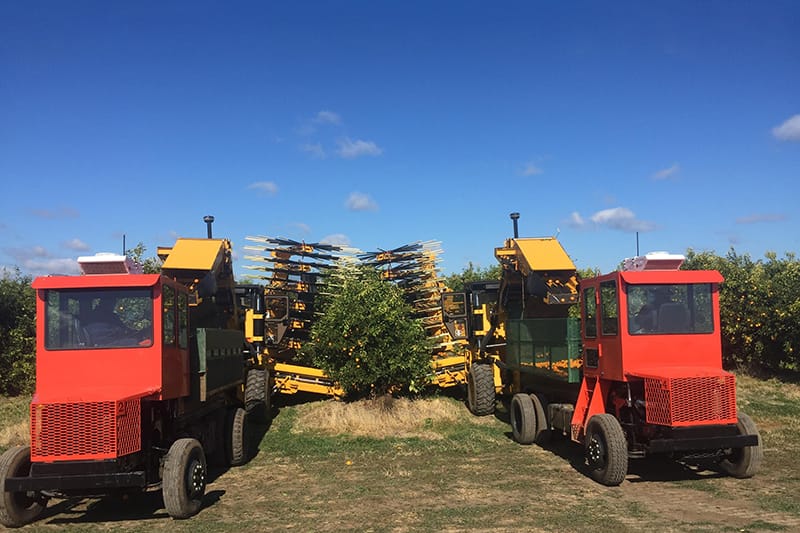 Picking winter Valencias has traditionally extended into late November or even early December at the Estens family’s Grove Juice orchard near Moree in northwestern NSW.

That changed dramatically last February, however, with the arrival in Australia of an Oxbo mechanical harvester – one of only 13 such pieces of specialist equipment anywhere in the world. One of the other machines is in Europe and the rest are unused rusting away in Florida due to the collapse of the citrus industry due to citrus greening disease.

“Before that, everything here was handpicked,” farm manager Craig Estens said.

“We currently have 168 hectares of Valencias on one farm and 182ha on another – 350ha in total. Our operation’s predominantly winter-bearing at the moment, although we’ve just put in another 80ha of summer/shoulder varieties this year so the overall balance of trees in the ground is now about two thirds summer to one third winter.”

Craig said juggling the labour and logistical requirements of handpicking had become a frustration in the relatively remote location.

“It was beginning to be a huge undertaking as our citrus started to get into the bigger tonnages,” he said.

“As far as finding labour goes it’s been very difficult. We’re approved for the (Australian Government’s) Seasonal Worker Programme so we have some people we bring in from Vanuatu, and we also use backpackers and locals.

“Then there’s the infrastructure we’ve had to have to handpick: orchard tractors and trailers and bins.

“There are also the risks of people falling off ladders or being injured by the repetitive work of pulling oranges off trees; we’ve had a couple of WorkCover claims.

“We had one German backpacker work with us for a week then he developed sore wrists and got WorkCover for three months.

“All told, we have a lot of work and money invested.”

Craig said both blocks had been planned from the outset with mechanical harvesting in mind – something that paved the way for a smooth transition once the first wave of trees began to reach maturity and the right machine was found.

“We were always set up for this,” he said. “We knew that down the track we’d head in this direction because of the scale of the orchard and to keep costs down and keep us competitive in the juicing market.”

Craig said the family diversified into growing citrus as part of its strategy to boost the rate of return per megalitre of water used on farm.

The Estens located an Oxbo advertised for sale in Florida and finalised the deal in September 2016.

“We had to pull it down and clean it up and fumigate it and have it all checked out and quarantined, so it was quite an undertaking to bring it out here and then basically rebuild it and get it into the paddock: about $1.7 million it ended up costing (including the four trucks). There were a couple of modifications and upgrades that had to be made – Heath Estens did a great job of that – and it’s been resprayed so it looks brand new.

“Because there are only 12 of them in the world we also had to bring a couple of containers of spare parts with it.”

The Oxbo was accompanied on its journey across the Pacific by four ‘goats’: modified Ford F-750 trucks that receive the fruit as it’s harvested and are fitted with a scissor-lift mechanism to tip the fresh oranges into the roadtrains that carry them just over 320km to the Grove Juice factory at Warwick in southern Queensland.

“Once we started using it in the paddock there were still a lot of unknowns,” Craig said. “It worked in the States so there was no reason it shouldn’t work here, but we weren’t sure in regard to what it might leave behind and whether there would be much damage to the trees.

“Basically, we had to train up our staff. We brought a guy in from the US for a couple of weeks help us to troubleshoot and finetune it, and that worked well. It’s turned out to be a pretty reliable machine.”

The Estens have set 0.8 miles (1.29 kilometres) an hour as their optimal operating speed, but as the fruit matures they can double the speed.

“We were picking two roadtrains a day this year on a yield of about 35t/ha. As yields increase we’ll be able to pick more fruit and therefore fill more trucks per day. To do two roadtrains a day handpicked you can imagine the people we’d need to have running around. With the Oxbo we have two operators plus two ‘goat’ drivers – four staff.”

Craig said the other major benefit of mechanical harvesting was the flexibility it provided to ramp up production on demand.

“If we see a weather event coming or if the factory needs more fruit from us for any reason – if it rains down south and interrupts supply, for example – we can put in an extra few hours and pick more roadtrains. Before, to get another two trucks a week we have needed to get on the phone and find another 10 or 20 backpackers. Now, we just pick for an extra day and we’ve got it.”

The Oxbo completed its first season without causing any significant damage to Grove’s trees.

“There was a little bit of adjusting but once our operators became more skilled we were able to do a pretty good job with minimal structural damage – very few broken forks and things like that,” Craig said. “We sent pruners through afterwards to knock out the odd broken limb; we prune every orange tree every year anyway.

“If anything, the little bit of breakage that did occur is just letting more light into the centre of the tree.”

He said fruit set did not appear to have been compromised by the process.

“We harvested right up till the middle of October so some trees were in flower by that time,” he said. “However, it doesn’t seem to have knocked this year’s fruit set around. It still looks healthy; there are plenty of fruitlets there.”

Craig said the Oxbo left 10-12 per cent of fruit on the trees in its first season but he was optimistic that the ratio would drop once tonnages increased.

“We have a few three-year-old trees that we handpicked this year. They’re still a year or two away from being machine-harvestable. It would be interesting to see what this would do to a tree so young, though: to go through machine-harvesting from the get-go.”