Iraak grower Darren Minter has long been an advocate for aggressive pruning and its results on citrus production and pack-outs, and shared his techniques with more than 60 growers at the Murray Valley Regional Forum on his orchard last week.

Darren has utilized heavy chunk pruning for 15 years and has now also adopted a technique of further heavy pruning on closely planted trees.

He attributes his heavy pruning technique to his rise in production – averaging 50t/ha last season across the farm, including big and little trees – and his improvement in pack-outs.

“We used to achieve 25% Class 1 fruit before we started pruning, and now rarely have less than 60%,” Darren said. His consistency has been recognized through MFC.

With radical pruning, the tree is quickly lopped with a chain saw. The pruner cuts the east side of the tree first, which opens up the bark and enables light to penetrate the tree, promoting new growth.

Darren said the western side of the tree can be pruned at the same time, depending on the size of the tree, but this is normally pruned in the second year. In the third year the top is heavily pruned.

His rule of thumb is cutting no more than 30% of timber from the tree. If the trunk is 100mm, don’t prune anything less than 30mm.

By cutting from the sides first, and not the top, the limbs fall easily to the ground for disposal.

Darren cuts the shady side of the tree first. “I do the east side first, then the west side. This opens up the bark and let slight penetrate into the tree. The bark then hardens and shoots new growth.”

“You can prune the western side at the same time depending on the tree, but normally in the second year. Then you take the tops out in the third year. This falls through the centre and is easy to pull out and dispose.

“You could spend up to $5/tree on traditional pruning, which was common when I was young. This method costs $1/tree to prune, which is the cost of the pruner with a chain saw.

“The old theory was if you cut anything with flowers you get less crop. That’s a fallacy.”

“In the fourth year, on the western side, I cut off big limbs with a chain saw one metre from the trunk. These also roll out to the centre of the row.”

This was a collective idea from Darren, his manager, MFC’s Bill Robinson and Spanish-bsed consultant John Chavarria. It allows more room in between trees, while also promoting fresh timber.

The bigger cost is removing the branches, with Darren hiring a contractor to splinter them, before mulching it even finer and spreading it on the trees.

Darren has also adopted a Spanish method, which aligns with his philosophy of heavy pruning.

“We had 12 year old trees and the initial thinking was there was nothing left to cut. We told our workers to cut the top out, as high as they could reach, which is what they do in Spain, and it worked.

“With this, the tree is totally replaced. We have trees planted in the 80s and they all have new wood, and the results speak for themselves.” 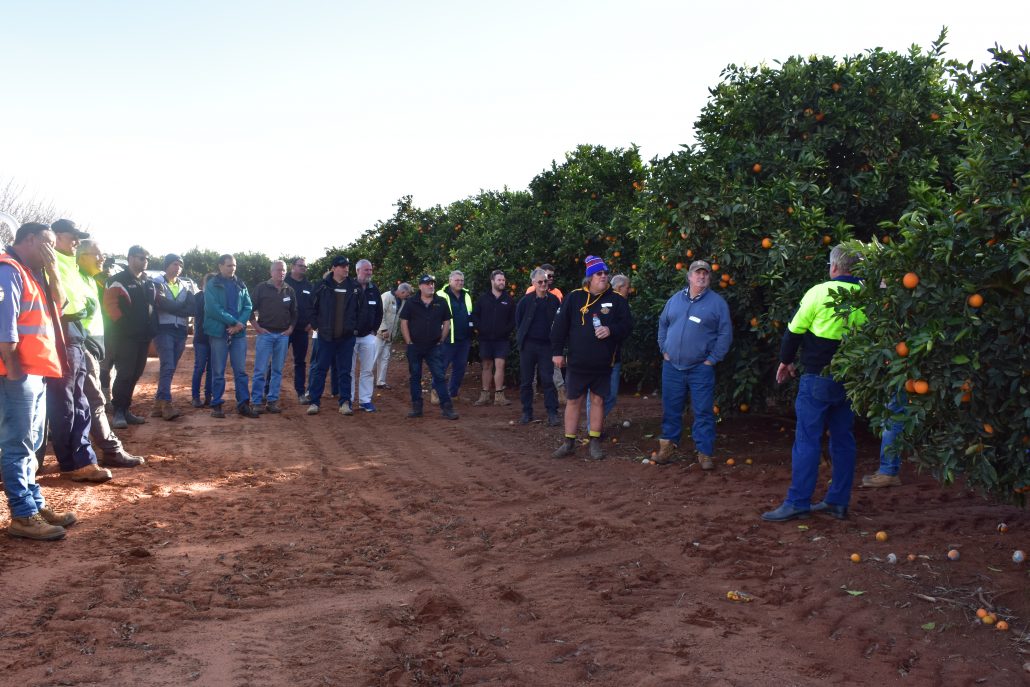 Darren Minter on his Iraak orchard explains his pruning trials to delegates during the Murray Valley Regional Forum.