HARPS hits the right note for growers and retailers 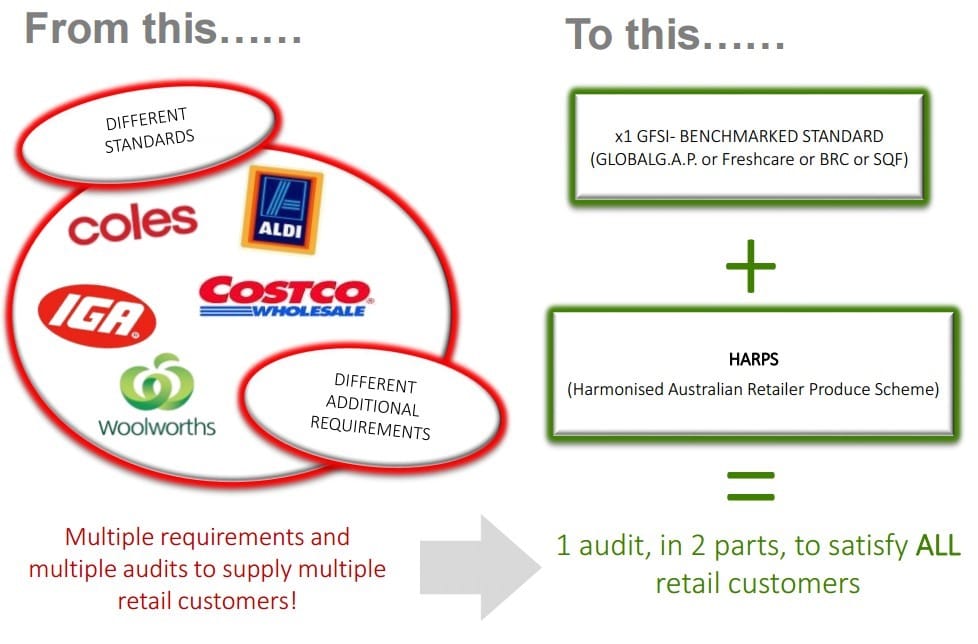 Over 270 audits have now been conducted under the new Harmonised Australian Retailer Produce Scheme (HARPS), and the feedback from audited businesses, auditors and retailers has been very positive, according to Richard Bennett, Head of Food Safety & Technology at the Fresh Produce Safety Centre.

Following a four-year development period, the Hort Innovation-funded Scheme was launched in October 2016.

This world-first initiative has harmonised the food safety certification requirements of Australian chain retailers in order to reduce the duplication of food safety audits previously required when a direct supplier has multiple retail customers.

The project has been made possible by the strong collaboration between the participating retailers – ALDI, Coles, Costco, Metcash/IGA and Woolworths.

“Direct suppliers are required to be certified to the standard in one of four globally recognised schemes. The standard chosen is referred to as the base standard.

“The Retailer Stakeholder Working Group has harmonised the additional food safety elements that Australian retailers had developed over the last fifteen or so years into one combined standard under HARPS.

“These were previously in retailer-specific standards, codes, checklists and addendums. The HARPS standard is audited at the same time as the base standard.

“All participating retailers are now accepting direct suppliers certified against the appropriate base standard plus the HARPS standard.”

Indirect suppliers are those who supply product to direct suppliers on its way to the five chain retailers. This includes growers supplying packers, and packers who are not packing into retailer-branded packaging.

Indirect suppliers will be required to be certified to one of the four base standards (BRC, Freshcare, GLOBALG.A.P. or SQF) from January 1, 2019.

For further information on HARPS, including the standard, the scheme rules, a comprehensive Q&A, a pre-audit checklist, a comments page and a free call number, go to www.harpsonline.com.au.