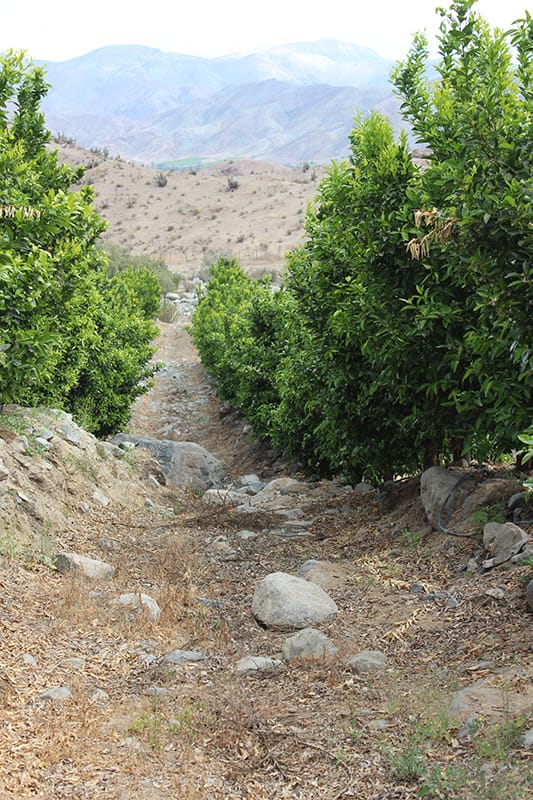 Chilean citrus growers have to contend with challenging terrain.

The Chilean citrus industry has undergone significant change in the past two decades, beginning with an increase in planted area of approximately 38 per cent. The area planted to citrus had increased from 13,000 hectares in 1990 to just over 18,000ha in 2015 and the indications are that this trend has continued since then.

In 1990 production was split equally between oranges and lemons, with next to no mandarin plantings recorded. In the preceding 25 years orange production had changed focus from Valencia to late navel but had grown only marginally in overall hectares. Mandarin production has ramped up rapidly and now accounts for approximately one third of citrus plantings.

The increase in overall area has also included an increase in planting density. When you visit Chile you begin to understand why this is the case, as there are considerable obstacles to planting citrus – namely significant slopes and rocky ground. The unique topographical features of the Chilean horticultural area dictate the land use. On the higher slopes there are avocado plantings on land wild goats would fear to tread. Below this, on the foothills and lower slopes, citrus is planted, and the flats of the valleys are reserved for grapes.

The main citrus production in Chile is centred around Areas IV, V, RM and VI. In particular, production has increased significantly in IV and V from 500ha and 1000ha respectively in 1995 to almost 5000ha and 4000ha in 2015.

Chile gained market access to the US for mandarins in 2005 and oranges in 2009. The US is Chile’s primary export market, taking 80 per cent of all citrus exports. However, there are new market access issues arising due to the US retail sector beginning to demand less or no seed in imported mandarins from Chile. The dominant varieties are Clementine and W.Murcott (Afourer), with the latter having been planted in abundance in the past five to eight years – tree sales have been above 300,000 trees per year for the past four years.

Producing seedless Afourer mandarins is problematic in Chile because pollen pressure is difficult to manage, given the number of small villages neighbouring the orchard regions; the yard trees in the village homes are commonly lemon and Valencia. Many orchardists are using drape netting in orchards or investing in net structures while others are removing trees and planting seedless varieties such as Tango.

Of concern for Australian growers is the push by Chile to gain market access to China. While progress on these negotiations has been delayed by other horticultural market access applications within Chile, it is considered likely that Chile will gain market access to China in the next three to five years. It is critical that the Australian citrus industry secures a ‘premium fruit’ position in China, because undoubtedly our product will come under price pressure if we are supplying similar-quality fruit to that available from Chile.