Frost fans already proving their worth at Pacific Fresh

Growers in the Riverina are investing in anti-frost technology designed to prevent extreme low temperatures destroying not only fruit but in some cases also young trees.

Marcello Mallamace and his family are one of eight shareholders of the Pacific Fresh collective. Marcello said they had been considering installing frost fans even before a series of cripplingly cold nights struck on the outskirts of Leeton in May 2017, and that experience prompted them to act immediately.

“Basically, we lost all of our Delta Valencias,” Marcello said. “We usually pack them but they had to go to juice, and our summer navels as well. We were just lucky that in the previous Valencia season there had been a shortage so processors were desperate to take anything they could get.

“Our mandarins weren’t good, either, so the prices were terrible but at least we sold them, and our Sumo mandarins were also damaged; we had to throw most out as we picked.

“The few limes we have lost every leaf on every tree – it defoliated them completely.”

On top of the crop losses, Marcello had roughly 40 per cent of a brand-new planting killed.

“We’d put them in in late autumn and it turned cold very quickly so they didn’t really get a chance to find their roots and shoot properly.”

Marcello’s biggest losses occurred on former rice farms planted to citrus for the first time in the preceding decade.

“We bought the properties as they were close to our home farm that we’d had for years. The drive from there to the main street of Leeton takes probably three minutes.”

Although the two properties are nearby, a slight variance in elevation means the newer ones are far more susceptible than the original to frost.

“We didn’t realise how much difference in temperature there was there,” Marcello said. “The original farm’s only maybe 1–2km away as the crow flies.

“You wouldn’t think across that distance it would differ much but it can be 3°C or 4°C colder.”

The Mallamace properties weren’t the only ones hit; in the same area Marcello’s uncles and cousins at Villa Rosa and a Pacific Fresh-owned farm also suffered heavily.

Ironically, being busy had derailed Marcello and his brother Domenic’s plan to order frost fans earlier that year.

“We’d already been talking to people about it. One old guy we were friends with told me about flooding in 1956. He said he remembered that after that wet winter the next two were really cold with bad frosts.

“In 2016 we’d had equivalent rainfall to back then so I thought if we’d had one bad winter and we’d probably get another one.

“We were going to put a frost fan into our mandarin paddock but then we just never got around to it.”

Regrouping after the disastrous 2017 season they fast-tracked the purchase last year. “We couldn’t afford to have another year like that. We couldn’t risk it again.”

Having taken advice from stonefruit growers at Cobram, the Mallamaces decided the New Zealand-made FrostBoss from Australian Frost Fans was the right choice.

“The stonegruit guys had done all the research,” Marcello said. “Angelo Diaco told us: ‘Don’t waste your time looking at any others. Put this one in.’ ”

As a result the Mallamaces had five FrostBoss C49 four-blade fans installed in 2018 and added another one this year. With each protecting an area of about 10ha, together they cover all of the first plantings of 40.4ha and half of the newer 33ha.

“Next year, if all goes well we’ll put another two in before winter.”

Triggered automatically when its sensors detect the temperature dropping to 0.5°C, the FrostBoss C49 draws slightly warmer air from the atmosphere down to ground-level and circulates a continual current through the orchard. It shuts down once it’s no longer needed, at 2.5°C.

“On a big frost night, even with the frost fans going it can be down to -4°C or -5°C but we haven’t had the same type of damage,” Marcello said. “Although it’s cold, the fans stop the frost penetrating the leaves and the fruit.”

While the 2019 winter has so far been comparatively mild, by late July the new fan had already clocked up about 120 operating hours. 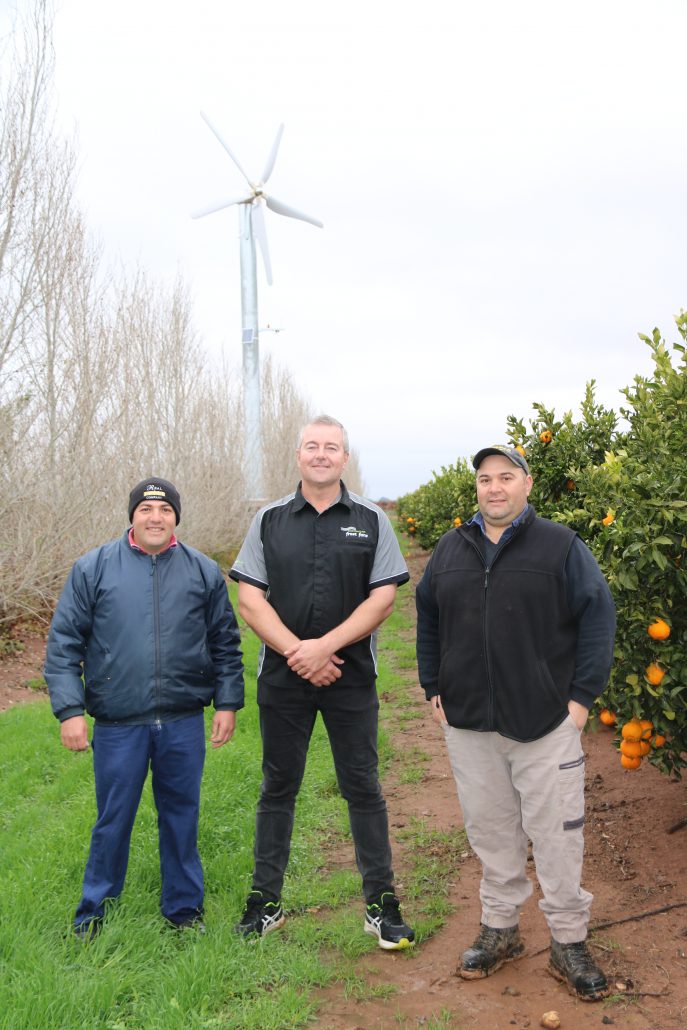