Seasonal workers are increasingly hard to come by as a result of the pandemic but Emma and Giuseppe from Jacaranda Farms in Gayndah have risen to the challenge.

Giuseppe and Emma took to social media when they realised their normal way of finding pickers just wasn’t going to cut it this year.

“We go flat out from December through to July so our season is pushed forward a lot earlier than most people because we have a lot of lemons and limes.

“We hadn’t needed to employ anyone so we got to December because we had the same crew, but then we started employing a lot of people in December and I realised we just couldn’t get them normally,” Emma said.

Creatively, Giuseppe selected a picture of his pickers from 2019 that showed happy faces and the beautiful region at the same time.

“Giuseppe came up with this concept and I worded it and changed it to make it seem more appealing to people.”

Emma says advertising to the worker rather than requesting workers meet the expectations of the business put their farm above others.

“The shoe is on the other foot now. Normally we have to bash people off with a stick. We get too many people.

“This time we’re competing with everybody to try and get bums in seats,” Emma said.

The post was shared throughout Facebook, reaching people across Australia and receiving positive comments of encouragement from previous workers.

“It helps that historically we’ve always had people who’ve had a really good experience.

“They’ll often jump on the post and say that it was a great time or we miss you guys and that helps. It helps other people understand that it’s a good place to go to,” Emma said.

The result of the post has been game-changing for the farm and Emma says they’re still receiving applications for positions.

“We’ve posted it twice now and each time we do we get about 50 applicants.

“In the current situation it is amazing. It actually means we have a waiting list to get in now.”

Emma says they’ve always worked hard to make sure their pickers are happy and word of mouth has helped them get workers in the past.

“It’s because as people come they tell their friends and we get those people who want to come as well because the job is good. We made sure the job is really good.

“The primary shortage that we have this year is people and we have to do everything possible to get the fruit picked.” 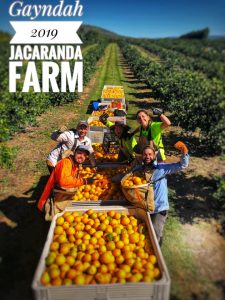