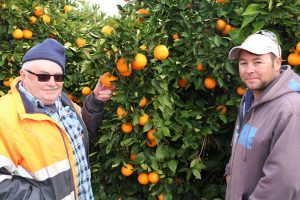 In horticulture, as in other walks of life, the most worthwhile discoveries sometimes emerge from adversity. This was the case when Australia’s citrus industry experienced tree-stunting and ill-thrift in Poncirus trifoliata, a rootstock with a natural resistance to phytophthora root rot.

It was a classic catch-22 situation: P trifoliata could withstand the phytophthora whose prevalence in trees planted on traditional sweet orange or rough lemon crippled orchards in the 1940s and ’50s but in some cases brought with it compromised tree size and general poor health.

The cause of these symptoms was found to be strains of the citrus exocortis viroid.

The smallest of all known infectious pathogens, viroids lack an outer shell made of protein so are sometimes called “naked viruses”.

However, research carried out by the NSW Department of Primary Industries (DPI) found a single graft-transmissible dwarfing (GTD) strain known as CVd-IIIb produced smaller trees without any ill effects, and in 1955 the first in a series of field trials was initiated.

Sixty-odd years later, with development of a commercially-viable dwarfing rootstock for citrus still a work in progress, this dwarfing viroid is being promoted in Australia as a highly efficient means of controlling tree vigour.

Inoculation with GTD material is carried out via budding on young trees already in situ, ideally at least six but no more than 18 months after planting. Trees develop normally for another 4–5 years, allowing a canopy to be established before growth slows.

While overall tree height is cut by about 50 per cent on P trifoliata, 25pc on Troyer citrange or 20pc on Carrizo citrange rootstock, the timing and intensity of flowering, and fruit diameter, colour, juice content and acid levels, are unaffected. A block of Valencia at the DPI facility at Yanco in the Riverina inoculated with GTD was yielding 40 tonnes a hectare in year four and, 35 years later, is consistently giving 55–60t/ha.

The benefit to growers is two-fold, according to Andrew Creek, NSW DPI citrus development officer at Yanco: being able to plant in high densities and at the same time minimise mature tree height, thereby making manual picking both faster and safer.

“Harvest with ladders is dangerous and an inefficient use of labour,” Andrew said. “The productivity of a worker walking up and down ladders is reduced by 30 per cent compared to pickers standing on the ground.”

One of the first citrus families to embrace the dwarfing viroid was the Harrisons at Stanbridge near Leeton, NSW.

“This all started when Alan Harrison’s father had the original Stanbridge farm,” Andrew said. “Ron Hutton [at the Yanco DPI site] and Alan picked up on the dwarfing research and put the science into commercial field practice.

“Recently I spent a morning at the Leeton Men’s Shed speaking with Ron over a cuppa. Growers like Alan and retired researchers like Ron are an absolute wealth of knowledge and experience.”

Participants in Citrus Australia’s Juice Forum in June were able to see some more recent plantings – including Salustiana, Hamlin and Parson Brown – during a tour of the Harrison property.

Salustiana on trifoliate rootstock was among the blocks inspected.

“Growers with natural Salustiana are hedging heavily or pruning every year to manage the canopy and as a result experience lower yields,” Andrew said.

“Alan’s Salustiana were inoculated with the dwarfing viroid 18 months after planting and grew naturally for six years until it kicked in. By planting higher densities and effectively using the viroid Alan has maintained yields in excess of 60t/ha without the expense of pruning.”

Orchard management was crucial to achieving optimal outcomes with the dwarfing viroid – “especially the suitability of the rootstock to the soil conditions”, Andrew said. “Trees should not be stressed but must be well maintained. GTD-inoculated trees are not recommended for locations that may have water shortages or high-salinity irrigation water.”

He said field inoculation – costing about $1.37 per tree – should be timed to avoid particularly hot weather, which could cause the failure of new ‘buds’ (in actual fact a piece of virus-indexed bark rather than a true bud), and in areas prone to high winds a windbreak crop such as ryecorn or Jumbo sorghum could protect young trees.

Andrew said growers should be aware that cross-contamination was possible if sanitation measures were not taken. “GTD can be spread from inoculated to normal trees on cutting tools when pruning, hedging or budding. Sterilise all blades used on dwarfed trees before using them on non-inoculated trees,” he said.

“With good planning and management, the dwarfing viroid can increase productivity and profitability of citrus orchards.”

As the next step in recommending this as an option to the wider Valencia and navel orange sector, Andrew – with input from NSW DPI plant pathologist Nerida Donovan – has produced a four-minute explanatory YouTube video summarising the advantages and procedures involved.