DV Valencia ticking all the boxes

When DV Valencia oranges are delivered to the Lion Leeton factory, their arrival at the NSW juicing plant is noticeable.

Initially it is because the new variety of fully-coloured Valencia fruit start landing in December, earlier than some other Valencia varieties.

“We have access to fresh Valencias in the earlier months as opposed to having to put in a late Lane navel or something like McMahon or mid-season variety,” he said.

“It fills a really good niche for access to fresh Valencia oranges….the DV yield in general, you get more bang for your buck.”

Consistently producing 480-495 litres a tonne – up 2- 5 per cent compared to other summer juicing varieties, at the Leeton factory, the DV is attracting interest.

There’s been little development in the Valencia range for years, with poor returns and a shrinking industry deterring grower interest.

At the factory, Jason believes the variety has created more enthusiasm around Valencia oranges and juice production.

“Anything which has a niche in this case a high yield and a particular window when other competitors aren’t there, bodes well for a market that wants fresh juice on demand,” he said.

It yielded 160kg per tree across the five years from 2015-2019, just eclipsing the Keenan Valencia at 157kg/tree during the same period.

Funded by Hort. Innovation Australia, the project included a Valencia clone trial with a range of rootstocks at Stanbridge near Leeton.

The study proved the combination of the DV Valencia (known in the trial as Valencia 5) with the Zao Yang rootstock type, in each season, was able to hold higher sugar levels compared to the control combination, according to Dr Khurshid.

“The interaction effect indicated that 0Brix for the for the Valencia 5 (DV Valencia)/Zao Yang combination was 14.7 as compared to the control combination Tri22/Keenan Valencia 11.2,” Dr Khurshid said.

For the Davidson family who have the plant breeders right, the success of the DV – Davo’s Valencia – is testament to John Davidson and his quest to find a good juicing orange variety.

It has been more than 20 years since John identified a stand-out tree at their family orchard at Stanbridge in the NSW Riverina.

For the past few years, since John’s death, his wife Carol and son Justin have championed the variety.

Justin said his dad couldn’t believe his luck one of his own trees started producing unusual fruit.

“Dad found this one tree, in February, that had fruit which was completely orange, when the normal Valencia regreening process has occurred,” he said.

“It just stood out so much he thought that has to be a different variety. Once he started testing it, each year the fruit stayed the same orange colour. Every year it stands out.”

After testing for juicing qualities, John started to grow trees from the ‘mother tree’ – a process which took three to four years. Trees where then grown from the ‘daughter trees’ and the process kept going, Justin explained.

This time-consuming method proved the colour and fruit quality endured with each trial – meaning, it wasn’t a “freak” tree.

John Davidson was a founding member of the Quelch juice factory at Leeton, now owned by Lion, and worked as the fruit purchasing officer for 44 years.

He held several industry roles and, as a fourth-generation citrus grower, ran the family’s 100ha orchard which spanned two properties.

Last year, John was posthumously inducted into the Citrus Australia Hall of Fame.

This award recognised his outstanding service to the industry through committee and volunteer activities and his work to develop the industry and Citrus Australia.

Last year about 25,000 DV Valencia buds were sold domestically, with budwood sent to Europe and South Africa for trials.

It is being marketed by Variety Access and Wayne Parr.

The DV was originally investigated for juicing purposes, but Justin said it was now being considered for the fresh fruit market because of its colour. This characteristic also ensured better returns for growers too.

“Everyone wants an orange, orange, they don’t want a green orange and that’s sort of what you can get in the summer months when it is all thrown in a bag and put on the shelf,” he said. “The class one fruit stands out on its own. It is ticking the two boxes, getting the good colour for packing and the juice quality is there.”

“The DV does not re-green to the same extent as other Valencia selections, it remains its orange colour longer into the summer and autumn.”

Valencia oranges had been a casualty of an expanding mandarin and navel market in recent years.

Developing a new Valencia variety would help improve the cost-effectiveness of the product for growers, according to Justin.

“There hasn’t really been a variety in the Valencia category where you are going to get more money,” he said.  “Whereas the navel category, if you compare the two, returns are based from your pack-outs. If you get a good quality navel with good skin, they are in demand, people want them for export… the navel growers are getting really good returns now because of the quality varieties coming in and they know what to plant because there’s data backing it up.”

Justin hopes the increased yield, quality, and orange colour of the DV Valencia will make Valencia’s more profitable for orchardists.

“It definitely gives (growers) the option, especially if they want to rework old trees or pull out aging trees, that are only producing 20-25 tonnes a hectare,” he said. “When you look at the data from the NSW DPI trial work, and we know ourselves, what we are getting from our tonnes/ha, it is pushing 40 tonnes- plus per hectare. That is quite good. You can make money off that.” 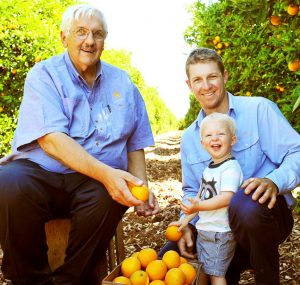 The late John Davidson with his son Justin and grandson (Jack). 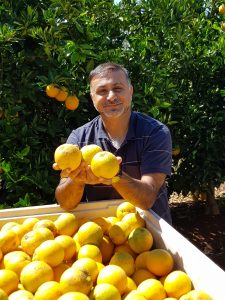 Dr Tahir Khurshid is displaying “DV” Valencia
during harvest at Stanbridge in December, 2019.

Dr Nerida Donovan: Shaping Australia’s response to HLB Time for the CMO to have a check-up – a reality check-up Scroll to top