Man’s best friend will work on the biosecurity frontline to protect the Australian citrus industry, in a national first trial.

Just when you thought it wasn’t possible to love dogs anymore, the canines will be trained early next year to sniff-out the destructive citrus canker disease.

But unlike their counterparts in the US, Australia’s detection dogs must learn their craft with an artificial lure.

Alex Fulton, citrus canker project scientist with the Northern Territory Department of Industry, Tourism and Trade Biosecurity and Animal Welfare, said to her knowledge it was the first time an artificial lure for a plant bacterial disease was created in Australia and there were many benefits.

“The good thing about an artificial lure is you can replicate it time after time, it can be made to a consistent formula,” she said.

“With live infected plant material, you can’t be certain of exactly replicating that same one each time or delivering the same quantities of chemicals.”

An artificial lure is also preferred because of the ability to:

It also allows for field trials without any risk of spread of the disease or potential harm to a detector dog.

Creating the lure took about six months and included experiments to identify the compounds and chemicals, as well as time for chemists from the Charles Darwin University College of Engineering, IT and Enviroment to blend it into a liquid for application.

The volatile organic compound (VOC) emissions, crucial to replicate the odour of citrus canker, were collected through three experiments including live plants infected with disease, bacteria growth and from individually infected leaves.

The results from the experiments then inform the chemical composition of the scent blend, with formulation currently underway.

The plan is to incorporate the liquid formulation on a cotton cloth, or cotton wool, which will absorb the odour with limited background odour.

A procurement process has commenced to source two detector dogs and a handler for proof of concept imprint trials. Several agencies have been approached to gauge their interest and capacity for supply. A tender process will then be conducted to offer a fair and open process to all interested parties.

Labradors are often the preferred breed, due to their focus, versatility, steady temperament and strong hunt and retrieve drive.

However, other breeds may be suitable with Springer Spaniels used in NSW to detect Hawkweed, and Belgian Malinois used in the US to detect citrus greening disease, according to Alex.

“We have a four to six-week time frame to imprint the dogs,” Alex said. “The first trial will be pure odour identification, where the handler consistently gives the dog the target odour, so they associate the target odour with a reward.”

The following steps include introducing “non-target” odours and blind testing, to ensure the dogs don’t pick-up on any subconscious behaviour of their handlers which might indicate the location of the lure. The final trial includes placing lures outside for the dogs to identify the odour with the competing winds and other smells.

Funded by the Australian Government, Alex said the advantage of using detector dogs is that they can detect the disease earlier than humans can (before symptoms are visible), and cover a larger area in orchard settings.

As the citrus canker eradication program draws to a close in the Northern Territory, Alex said the detector dogs could provide ongoing assurance to citrus growers that the disease is absent and remains so.

In addition, trained dogs would enable a quick response if citrus canker returned.

“Depending on which way we go, if we get another incursion of citrus canker, we’ll have the knowledge and skills to rapidly imprint and deploy a dog and delimit the area of infestation quickly,” she said. 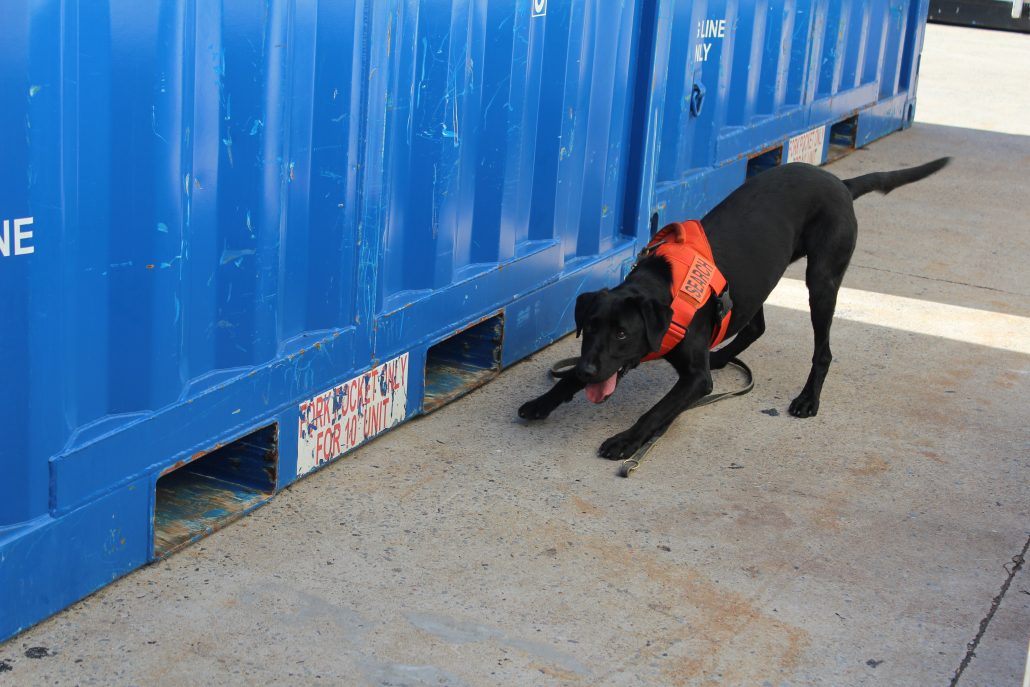 Dogs like this Browsing Ant detector dog, that travels to the NT from Queensland to do surveillance for this invasive species, will be trained to detect citrus canker.