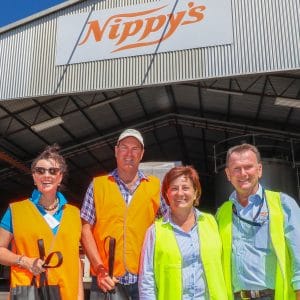 In actual fact, four of the multiple varieties of fruit and vegetable juice rolling off the production line at Nippy’s at Moorook, South Australia, now have a potential shelf-life of at least a year.

Now in its 52nd year, Nippy’s has been processing long‑life juice and flavoured milk since the mid‑1980s.

Its history as a producer of fruit stretches back even further: to the 1930s, when Alic Knispel started growing and packing citrus in the Riverland. With about 300ha of orchard the Knispels currently provide 20-25 per cent of their own juicing requirements.

“Our market in Japan was buying this product for the food-service sector but not doing particularly well with it, and as it happened the machinery we were using was becoming quite old and the supplier informed us there would be a limit to how long it could go on providing spare parts and maintaining it.

“We needed to consider either buying the next generation of filling machine or maybe deleting the product; we needed to rethink what we were doing with long-life processing of fruit juice and where we were going to market it.”

In the end Jeff and his team decided that rather than simply replace like with like they would invest in a major upgrade.

“Our research showed that a plastic bottle would be the favoured container for this type of product for the next few years so then we thought we’d see if we could find a PET filler that would not only produce a long-life product but also, hopefully, do more than one sized packaging so we could explore possibilities other than just the one‑litre market.”

The Knispels’ ultimate choice of equipment “essentially fills in a much cleaner environment,” according to Grant Day, sales manager – liquid foods for JBT, which installed the filler.

“Aseptic filling is simply filling in a sterile environment and avoiding the possibility of recontamination.

“It is that clean filling environment, combined with a sterile container and barrier properties of the bottle that contribute to extending the shelf life.

“This means that a premium not from- concentrate juice can have a significantly longer shelf-life while keeping the transparent PET bottle with a single-stage, tamper-evident cap that consumers are accustomed to for fresh juice.”

In the case of Nippy’s, breaking with tradition by introducing a new container type was the impetus for elevating the product into a higher value category.

“Because we were starting something new, we said to the market in Japan

‘We want you to do something else as well: treat this as a cool-chain product’,” Jeff says.

“It’s cold-pressed from chilled fruit and cold-filled, we sea-freight it refrigerated and they warehouse it refrigerated, and it goes into refrigeration in the retail outlets – the dairy cabinet as opposed to the dry grocery aisles. Not only does this preserve the fresh flavour and appearance of the product but it also creates a perception with consumers that if it’s with the yoghurts, cheeses and milk it must be a fresh product, too.”

Jeff says while Nippy’s could confidently assign all four juices a shelf life of at least 12 months it prefers to specify only half of that to encourage repeat sales and ensure the product is consumed before any slight deterioration in quality occurs.

“We’re doing a one-litre and also a 300-millilitre single serve that’s already in 7-Elevens in Japan, for example,” he says.

While exporting the new long-life juices began only in late December, Jeff says sales have boomed from about one container a month of the original product to 20 containers since Christmas. It is also sold domestically.

“At this rate we’re probably going to be hunting around for every last blood orange and ruby grapefruit in Australia for juicing,” Jeff says. “Because of the way the Japanese market has responded we’re reluctant to start new customers just yet for fear of not being able to keep up with growth.”