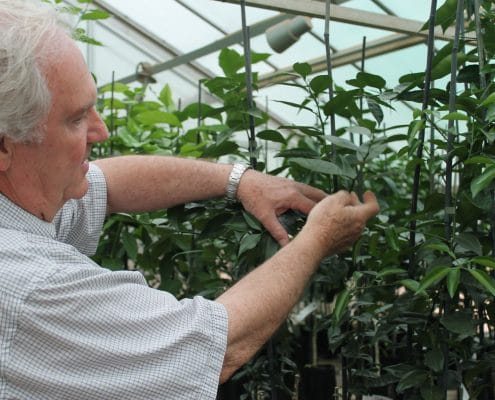 Graeme will be outlining these developments at the Citrus Juice Forum in Leeton, NSW, on 1 May.

Graeme said a range of Valencia selections had been introduced into Australia from South Africa by the variety management company Variety Access. Following release from Post Entry Quarantine in 2014, budwood of six selections were supplied to Dareton Primary Industries Institute for propagation and field evaluation.

Graeme said the first field grown fruit will be available for evaluation in 2018.

He said another South African Valencia selection called Gusocora had released been for evaluation and last October, was top worked into the evaluation trials.

“Several of the South African selections are considered seedless and would have a dual role for fresh fruit and processing.”

He is also excited to discuss the internally pigmented (pink) selection, which is being called Ruby Valencia.

Graeme said another Valencia trial established in the Riverina in 2010 to compare the performance of some Australian selections of Valencia on several high performing Trifoliata rootstocks, which were introduced from China, would also be discussed at the Citrus Juice Forum.

“The Valencia trial in the Riverina was initiated by the late John Davidson formerly of the National Foods company (now Lion) in response to the need to redevelop a lot of the older Valencia plantings in the region to higher producing selections on improved rootstocks,” Graeme said.

“This was supported by Riverina Citrus and funding to establish the trial provided by HAL (now Horticulture Innovation) as a Voluntary contribution funding initiative in 2007,” he added.

He said these developments would mean a wider range of Valencia selections in Australia, with different maturity times.

“Several more early maturing selections of Valencia such as Turkey and Benny will now be available to Australian growers and could provide good quality, Valencia style juice earlier in the processing season,” Graeme said.

For more information about the Citrus Juice Forum visit https://citrusaustralia.com.au/event/juice-forum. Remember while it is a free event, registration is required.