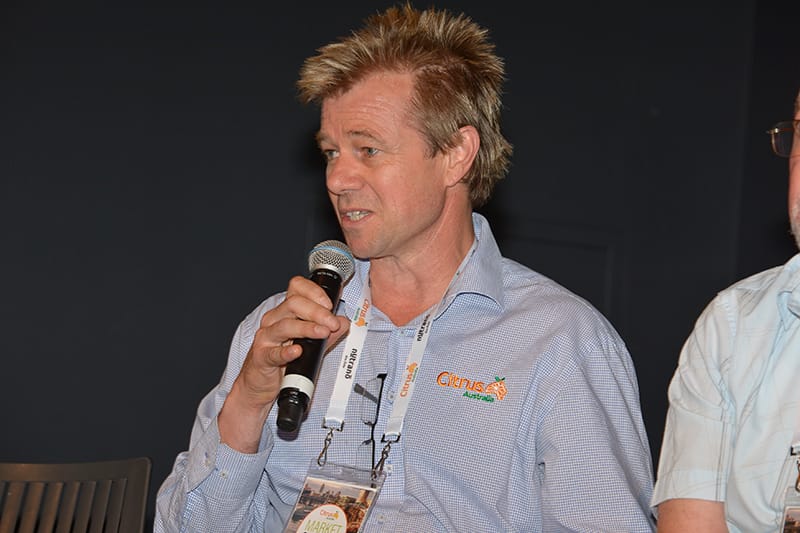 David said the growth in values in the past 12 months was thanks in large part to the growing demand for Australian citrus in Asia (especially in China).

He said China imported “a massive volume” of 70,000 tonnes of citrus (predominantly oranges and mandarins) – a 78 per cent rise overall year-on-year.

He said while Australia could export citrus to 50 different countries around the globe, it did so regularly to about 30 different markets, with 91pc of fruit going to just 14 markets.

“So, there are opportunities there in a whole bunch of other markets,” David said.

“We’ve seen China grow from year to year and we wonder whether it’s going to plateau or whether this growth is strong. It hasn’t stopped just yet.”

He said Japan recorded good growth as well at 14pc, and Malaysia 11pc.

David said the growth in Australian mandarin exports was “tremendous” and 171pc growth into China was “phenomenal” and something the industry could never have expected. Last year China took just over 20,000t.

He said in terms of Chinese total mandarin imports, Australia had the lion’s share, while about a quarter were from South Africa.

Really good volumes were exported from Australia to Thailand once again and David said promotions had been very successful in the past five years, taking exports from about 1500t to close to 10,000t.

“The only real disappointment [in mandarin exports] is Indonesia, with the trade restrictions going on at the moment; it’s quite disappointing. It’s really a market that should be at least 10,000t; [there’s been] a drop of nearly a third over the previous year just due to the regulatory restrictions there.”

David said there was also “really exciting news” in oranges in 2017.

He said data on the arrival of oranges into China was available for the first 10 months of 2017. It showed Egypt’s market share in the Northern Hemisphere season had grown more quickly than anticipated, and in the Southern Hemisphere season (from June through to October) Australia supplied a third of China’s orange imports.

“South Africa’s doing quite amazing volumes as well, in particular around the months of August and September.”

He said in some other markets, including Hong Kong, there was a fall in exports of Australian oranges.

“In many cases [there is] unmet demand there. It’s certainly not all our customer; it’s really just not enough fruit.”

David said Japan was “the big success story for the Australian orange industry”.

He said data on arrivals of oranges into Japan showed the US basically captured the entire Northern Hemisphere season.

“From June and July the market’s pretty quick to jump on Australian product,” he said, adding there were only small volumes from South Africa and not much else.

“We really have that market to ourselves. Great success story there – just pushed all the competitors out of that market over the years.”

Other avenues for growth

David said while growers throughout Australia were tending to plant more trees, he thought export markets could absorb increased supply.

“There are 50 or so markets that we send citrus to without restrictions… [but] there are really [only] three or four markets that are being exploited to their full potential.”