Citrus canker surveillance teams from Western Australia’s Department of Primary Industries and Regional Development are on the ground in the Kimberley and Pilbara as part of its ongoing response to confirm that citrus canker is absent in northern WA. 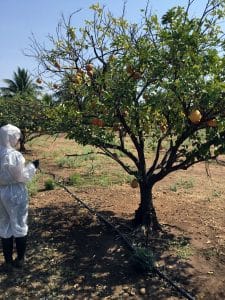 Citrus canker surveillance teams will be on the ground in the State’s north over the next few weeks checking citrus trees to confirm the absence of disease.

Department A/Chief Plant Biosecurity officer, Sonya Broughton, said the department had successfully completed the removal of all citrus plants around the three properties confirmed to have citrus canker in Wyndham and Kununurra in August 2018.

“The focus is shifting from tracing citrus plants known to have come into WA from the Northern Territory since January 2017, to asking anyone in the north who has a citrus plant, regardless of its age, to contact the department so it can be recorded and be inspected if necessary,” Dr Broughton said.

“The more citrus plants we can locate and inspect, the more evidence we have that citrus canker is absent in northern WA.

“Even if your plant is healthy, we need to know its location and health status as part of our surveillance work.”

Reports supporting the absence of citrus canker from all areas are valuable, and the department encourages everyone to make reports using the free MyPestGuide Reporter app.

Residents can also report plants to the department’s Pest and Disease Information Service on (08) 9368 3080 or email padis@dpird.wa.gov.au.

More information on citrus canker and response measures is available at the department website agric.wa.gov.au/citruscanker

There have been no additional detections of citrus canker in WA, since the initial three cases in May 2018.