Biological Services insectary based at Loxton in South Australia’s Riverland celebrates its 50th anniversary this year. It was set up in 1971 by Ron George before James and Simone Altmann took the helm in 1987.

It was established to breed Aphytis melinus, a parasitic wasp that kills red scale as an alternative treatment to toxic pesticides on citrus trees.

The biological product range has since been diversified to control key pests including two spotted mite, aphids, whiteflies and thrips, in a wide range of both protected and outdoor horticultural crops.

To cater for this demand a second insectary site located in Muchea, WA, is run by Lachlan Chilman.

“Quite a few citrus growers have never used them, but there wouldn’t be an orchard in southern Australia that didn’t have them present,” James said.

“The advantage of wasps is they’re going to be working 24 hours a day, seven days a week, during spring, summer and autumn.

“Whilst the wasps stay established in orchards year-round their numbers decline over the cold winter months.

“Therefore, it is important to boost levels every spring and then they’re working there all the way through the warmer months. Parasite numbers are highest in the orchard in autumn which is when the most control is gained.”

Cups of 10,000 parasites are delivered to growers, who can then release the wasps into their orchards in various locations.

Growers who regularly use the wasps generally release them at least three times a year.

Some release parasites over whole orchards, others only release on certain varieties, or boundaries, as a top up after pesticide sprays or extreme heat waves.

James said residually toxic treatments for other pests such as gall wasp can erase efforts put into establishing Aphytis.

“Growers need to think ahead about their treatment plans, to ensure that a blanket pesticide approach does not disrupt the whole ecosystem in their orchard,” he said.

“As long as you’re not spraying the whole orchard with something toxic at any one time (or every year) you can leave reservoirs for important beneficial insects and mites to survive.”

The parasites are reared in controlled atmosphere rooms on scale grown on pumpkins, which are easier to handle than oranges and do not break down as quickly. These conditions are ideal for growing healthy scale cultures.

An adult wasp’s lifespan is about two weeks in which a female can lay up to 100 eggs, roughly one-to-two in each scale.

The eggs hatch and the larva feed under the scale cover. The scale is killed, the larva pupates and after 2-3 weeks another wasp emerges to continue the cycle. 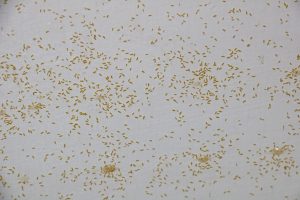 At the insectary, the harvested wasps are measured in a volumetric cylinder before being transferred to cups for distribution and release. The cups contain a small amount of honey for food which allows wasps to live longer after release.

One millilitre of wasps equates to approximately 8-10 thousand wasps. We generally release 2.5ml or around 25,000 wasps per hectare, but do this several times a year.

To improve the efficiency of biological control agents it is advantageous to reduce dust, wind, and ant activity.

“Increasing your plant biodiversity inside and outside the orchard environment is also beneficial by providing alternative shelter, pollen, and nectar sources for parasites and predators.

“There are many research papers and projects that give useful suggestions for this.

“However, whatever grows naturally well in your situation is useful provided it is a range of plant species rather than a monoculture.” 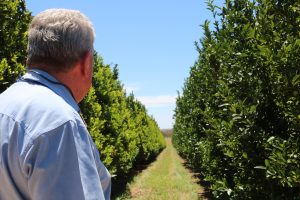