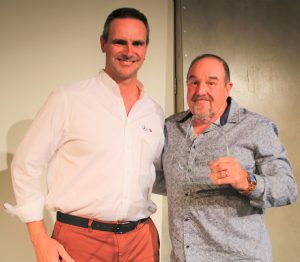 Citrus Australia Chairman Ben Cant with Bill Robinson, who was inducted into the Citrus Hall of Fame.

There wouldn’t be many involved in the citrus industry that haven’t been influenced in some way by Bill Robinson, and not many that haven’t heard his catchphrase: “The tree pays for everything”.

This catchphrase and Bill’s philosophy have become something of a mantra at MFC, where Bill first gained employment in March 1975 working in accounting and administration for several years before switching across to an agronomy role as Fruit Procurement Officer in 1990; around the time of the opening of the new MFC packing shed.

Following the merger of Mildura Co-op and Sun Garden Packers in 1997, the extra grower base gave Bill the opportunity to show his worth in the position of Grower Services Manager – a role in which he flourished.

In both his jobs as Fruit Procurement and Grower Services Manager, Bill had a significant role in all aspects of the US Program – setting up grower protocols and scheduling harvest to meet vessel volumes.

With a genuine interest in developing strong relationships with citrus growers, Bill certainly made his mark at MFC, with good communication, regular orchard visits and initiating grower meetings – all this for the benefit of growers so they could receive relevant technical support, information on markets as well as general industry news.

These trips where invaluable to growers, not only for the wealth of information gained, but for the many contacts made and the strong alliances and networks formed.

With Bill’s vision of helping to bring the Australian Citrus industry forward, he recruited Spanish Citrus consultant John Chavarria, who with Bill’s support and guidance has certainly help developed the technical aspects of MFC growers.

Bill, together with John Chavarria and Danny Thornton authored the MFC Citrus Protocol, a very comprehensive booklet that was made available to suppliers of citrus to Mildura Fruit Company. This initial publication and subsequent editions have provided a wealth of technical information on all things growing citrus. No doubt, this MFC in-house publications has found its way into the hands of many non MFC growers.

When there was a whole lot of doom and gloom in the industry a decade ago and even industry leaders were stating publicly that there were too many navel trees in the ground, Bill was adamant that the wheel would turn and that we should seek more export opportunities – China then becoming the target for MFC.

Under Bill’s guidance, a small number of growers backed MFC in and embarked on the orchard compliance protocols for access to the KCT markets – and what a great success this proved to be with many in the industry following.

Bill made a public statement many years ago that “China will become a mainstream market in time – just like Japan”. Bill’s prediction has certainly come true and the industry has been a major beneficiary of the effort he put toward making the KCT program a success.

Bill has always been willing to give of his time, knowledge and experience. He has been a supporter of industry associations, participating in committees and working groups – often putting forward MFC’s name to assist with trials be it on management of pests and diseases or some other beneficial orchard practice.

He has spoken at many industry events in citrus regions throughout the country openly passing on his knowledge and views. He is also a current member of the Citrus Australia variety committee.

Bill has had a huge part to play in the culture and development of MFC, being a senior manager for 23 years. Bill in his position of influence, was always a strong advocate for the grower, much of which rubbed off on other members of the MFC staff and growers have always been a consideration at all levels of MFC decision making.

Bill retired from full time employment at the end of February, 2020 – a truly great servant to the many MFC growers, past & present, and the industry he has been a part of.