Improving spray coverage of your trees to its fullest potential is the best way to improve production and reduce disease resistance, according to US spray consultant Matt Strmiska, but how do you know if this is being achieved?

At the Citrus Technical Forum, Matt provided the example of a citrus grower in the US, who were losing 75% of their crop each year to disease. After three years of research with no change in results, they decided to inspect their spray coverage.

After optimizing coverage, they rectified the problem in the first season.

Matt stressed that calibration was not coverage.

“There are a lot of documents available to us on improving calibration. It’s not complicated. But, with coverage, it’s a very pie in the sky idea. You walk behind the sprayer and it looks good, but how do you know what you’re looking at?”

Matt developed a system with the US Department of Agriculture which correlates coverage of water-sensitive paper with coverage in a tree. The simple system has stages. [Figure 1]

Matt said with most modern fungicides, 30% of coverage on a target will likely result in failure. Some pests, particularly red scale, require 100% coverage.

“We did some work on one property who had used Surround and at first glance, the coverage looked good, but upon closer inspection with spray cards the coverage was patchy.

“Using cards provides a good assessment, but sometimes it just takes an attentive eye to look at the target. We walked behind one sprayer spraying water and it was not fully wetting the wood as it was intended. They were spraying 10,000 litres. It’s scary to think that much water could be so misused.”

Matt said recently published university research showed at least 90% of what is sprayed for insecticides is lost to off target locations within orchard. With some pyrethroids 90% off target will reduce the effectiveness of the spray by a minimum of 25%.

One key part of the problem is incorrect speed of the sprayer.

“I think every Australian spray rig must have a V8 in it. You need to slow down. Published research has shown 3.2km/hour is the best average speed for coverage. Go slower than this if you do not have strong enough equipment.”

Matt said the average sprayer delivers the majority of water down low and very little up high. The goal for all growers should be uniform coverage from top-to-bottom and throughout the canopy.

“A common mistake is to use a single uniform nozzle size. If you deliver a uniform water amount through the canopy, it often means not enough up top and over saturating down low.

“You need to look at the density of the canopy to water volume. For example, if you have 60% of biomass in the top third of the tree, you need 60% of water up there. You can do the calculations to work out biomass or make a sensible judgement call on how much is there.”

Matt said he has worked with growers who have applied these lessons who are now spraying significantly less often.

“Maybe their tank mix winds up to be more expensive, but they are producing better IPM  and getting higher yield or cleaner crops because they just took a look at how they’re spraying.”

Matt has recently been engaged by E.E. Muir & Sons to provide spray application consultancy services to a range of clients in Australia and other regions. 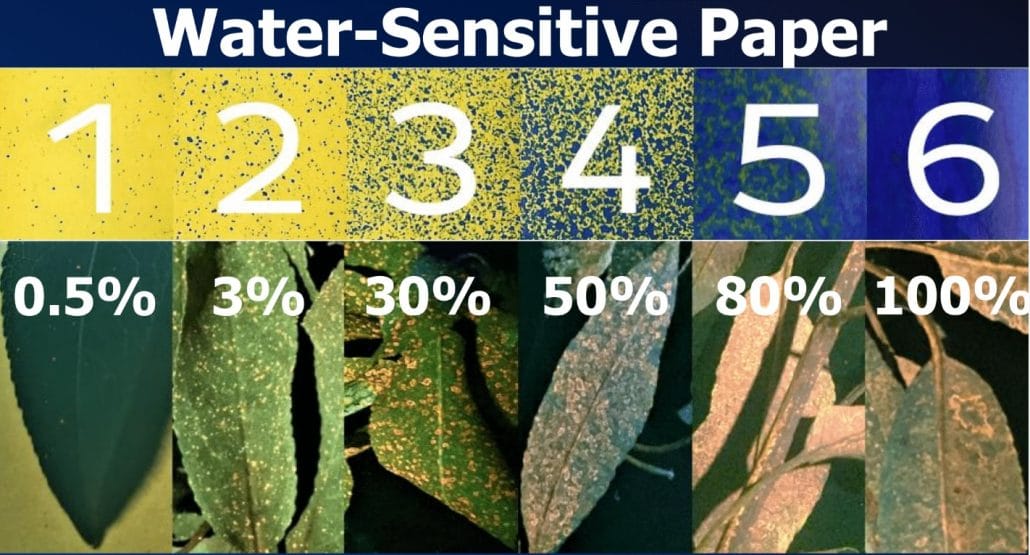 Back to the future for IPM Scroll to top