Under the proposed guideline revisions – to be considered at the Australia and New Zealand Ministerial Forum on Food Regulation on 22 May 2020 – the HSR for fresh juice with no added sugar will fall from 5 stars to as low as 2 ½ stars.

“Any decision that enables fresh orange juice to be rated the equivalent of diet cola is not only a misrepresentation of the health benefits of fresh 100% juice with no added sugar, but will have a detrimental effect on fresh juice consumption and the future of the Australian juice industry,” Mr Hancock said.

The algorithm that underpins the revised HSR assesses fresh juice on sugar content alone and does not consider essential nutrients, such as Vitamin C, Potassium, Folate and magnesium, or antioxidants.

The revised HSR is also at odds with the Australian Dietary Guidelines (ADG), which places fresh juice in the ‘eat more of’ category. There are allowances in the ADG for the substitution of fruit juice for a whole piece of fruit in the diet.

“Due to this inconsistency, we ask for any proposed announcement of the revised guidelines to be postponed and further consultation held to improve what is an inequitable system,” Mr Hancock said.

“We are particularly concerned that any suggestion that fresh fruit juice is unhealthy will have a detrimental health effect on the community leading into winter.”

Vitamin C contributes to immune defence and one 125 mL glass of fresh orange juice contains half the recommended daily intake of Vitamin C.

Australian juice processors have stated that the proposed changes to the Health Star Rating for fresh juice will have an immediate and detrimental effect on sales. Fruit juice currently contributes $736m to the Australian economy.

“We fear any decline in sales under this false premise would also hasten the demise of the Australian orange juice industry, which has already seen a 30% decrease in the production base over the last 18 years,” Mr Hancock said.

“A rating system that assigns the same rating to both 100% Australian grown fresh orange juice and diet soft drink is an embarrassment to the government, which should be desperately attempting to increase the intake of fresh fruit and vegetables within the Australian population.” 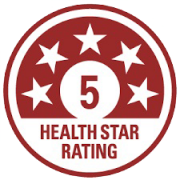